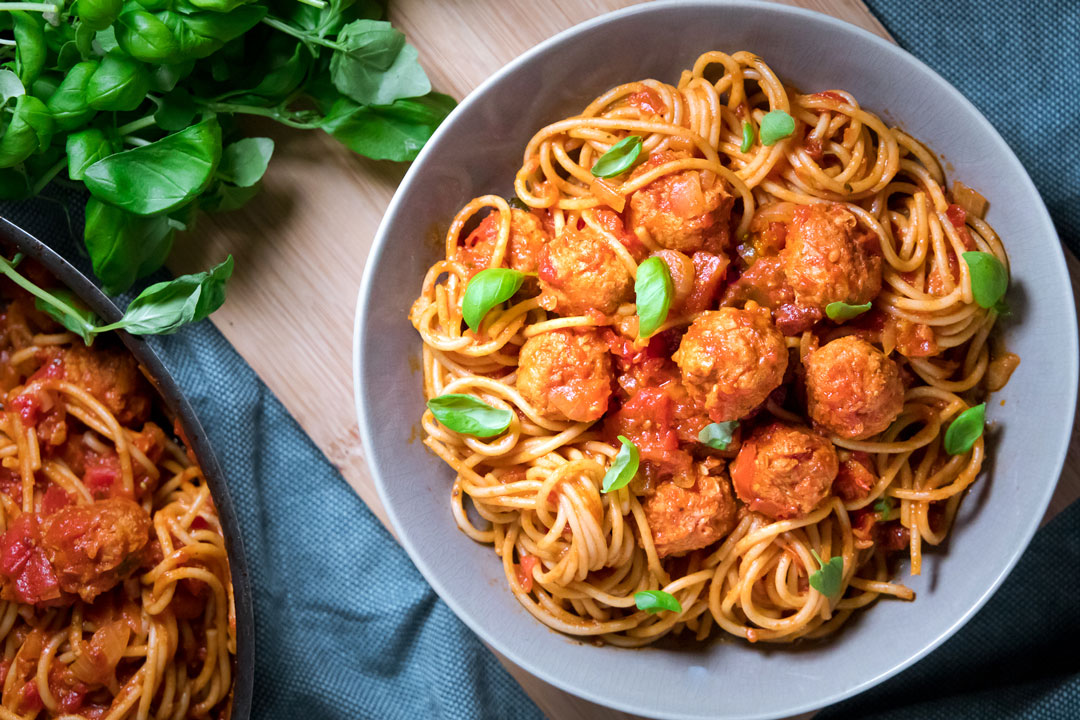 Arrabiata literally means ‘angry’ in Italian and refers to the spiciness of the chilli peppers used. My spaghetti arrabbiata won’t blow your socks off but feel free to add more chilli according to your preference. If you’re a fan of pasta dishes and looking for something simple, easy but highly satisfying to make, then you’ll love this.

If I’ve already won you over, and you’re drooling at the thought of vegan meatballs and spaghetti arrabbiata, then feel free to pin it so you can make it later… 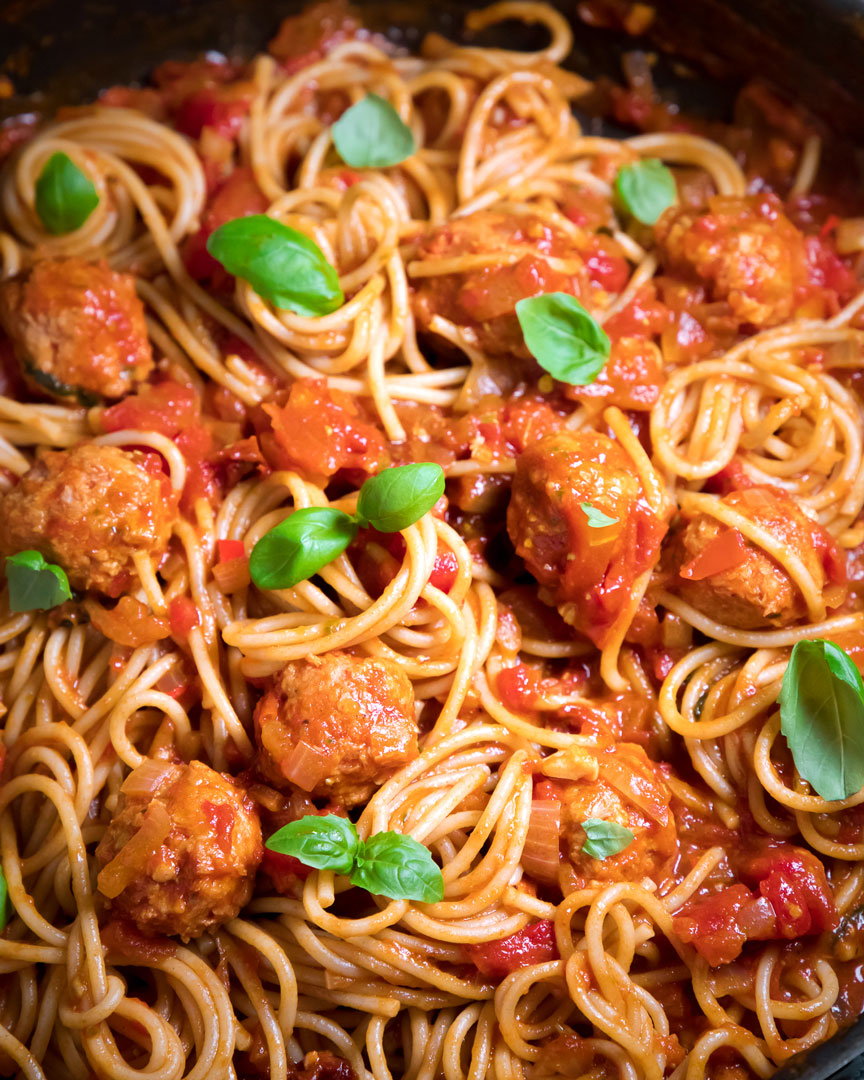 The simplicity of spaghetti arrabbiata

This classic fiery red recipe is one of my favourite go-to sauces for pasta cooking. Not only is it bloody delicious, but it’s so simple to make and is incredibly versatile. You can use it in all sorts from soups to pizza toppings, subs and more.

We’re not talking wild ingredients either. It calls for a humble base of canned tomatoes and simple seasonings, making it an easy cupboard recipe that you can whip up all year round.
Arrabbiata sauce is traditionally served with penne pasta, but here I’ve chosen to serve it with spaghetti and shop-bought vegan meatballs. 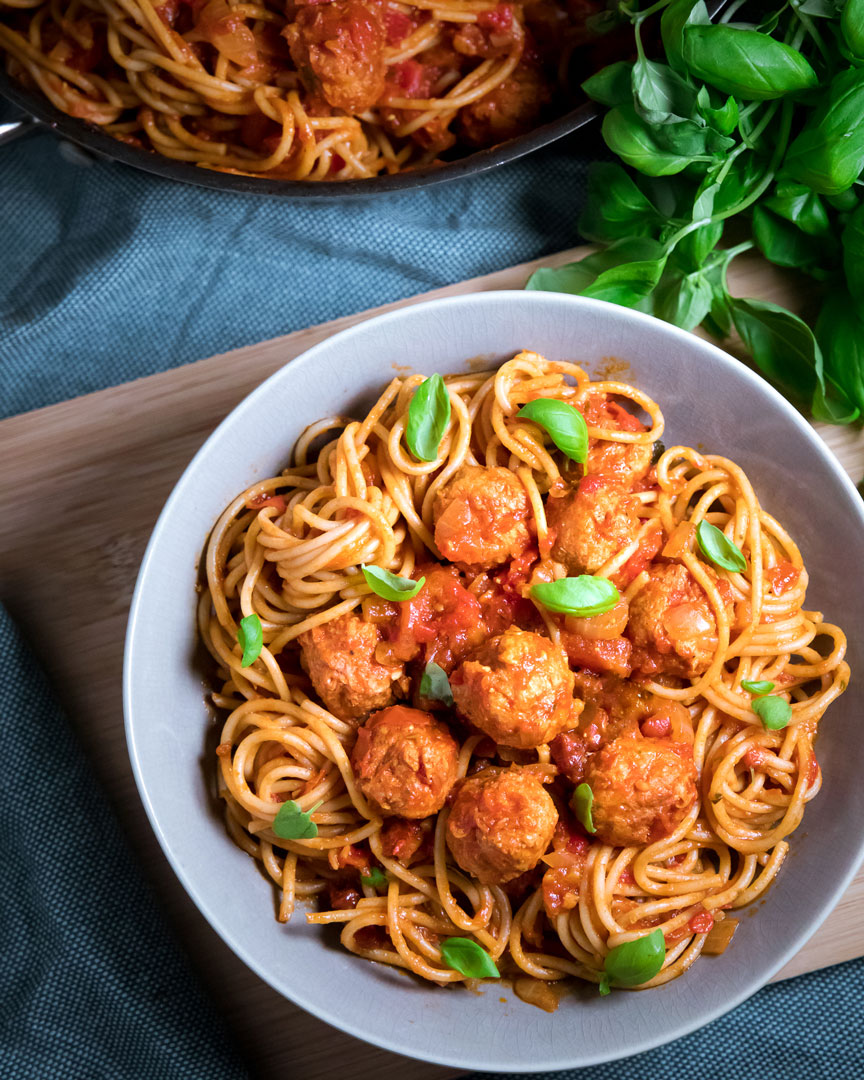 How to make vegan meatballs?

You can make vegan meatballs for a healthier homemade option. Many protein-rich recipes use lentils, quinoa, black beans or tempeh.

However, if you’re short for time, then you can pick up some vegan meatballs in the supermarkets. For this one, I used Iceland’s No Bull Vegan Meatballs made from soya. A few other examples include Linda McCartney, Birds Eye and Tesco’s Plant Chef.

What’s the best vegan parmesan for sprinkling on top? 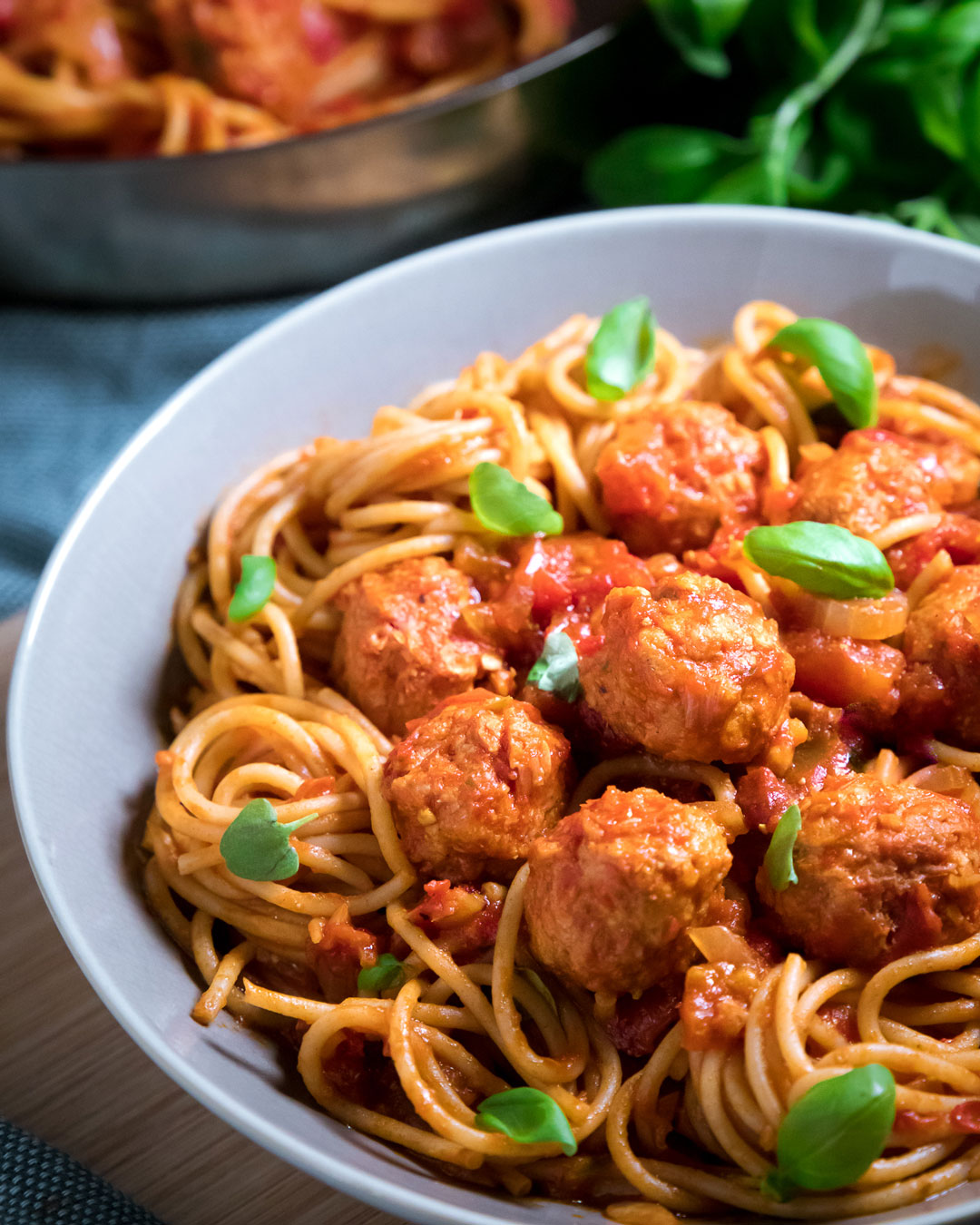 Cheese is a tricky one when you go vegan. Many supermarket vegan cheeses are coconut-based and simply don’t hit the spot when it comes to taste and texture. However, they’re getting better, and there are tonnes of vegan ‘parmesans’ on the market for you to try. I’m still trying them myself. Some examples include Violife parmesan, Urban Platter, Live Well, Pimp My Salad; but it’s also easy to make your own.

Another idea for a vegan ‘parmesan’ is a simple sprinkling of nutritional yeast (a.k.a nooch). You can buy Engevita Nutritional Yeast Flakes in the supermarket, and it’s a key ingredient to making vegan cheese sauces etc. That’s because it has a distinctive cheesy, nutty, savoury, and “umami” like flavour. Also, it’s a great source of B vitamins, so a great product to stock for your Life Without Meat.

I hope you enjoy this recipe and would love it if you could leave me some feedback and a cheeky follow on social.

If you're new to veganism, double-check you do buy free-from pesto as vegetarian and traditional pestos still contain the animal-derived ingredient, rennet.