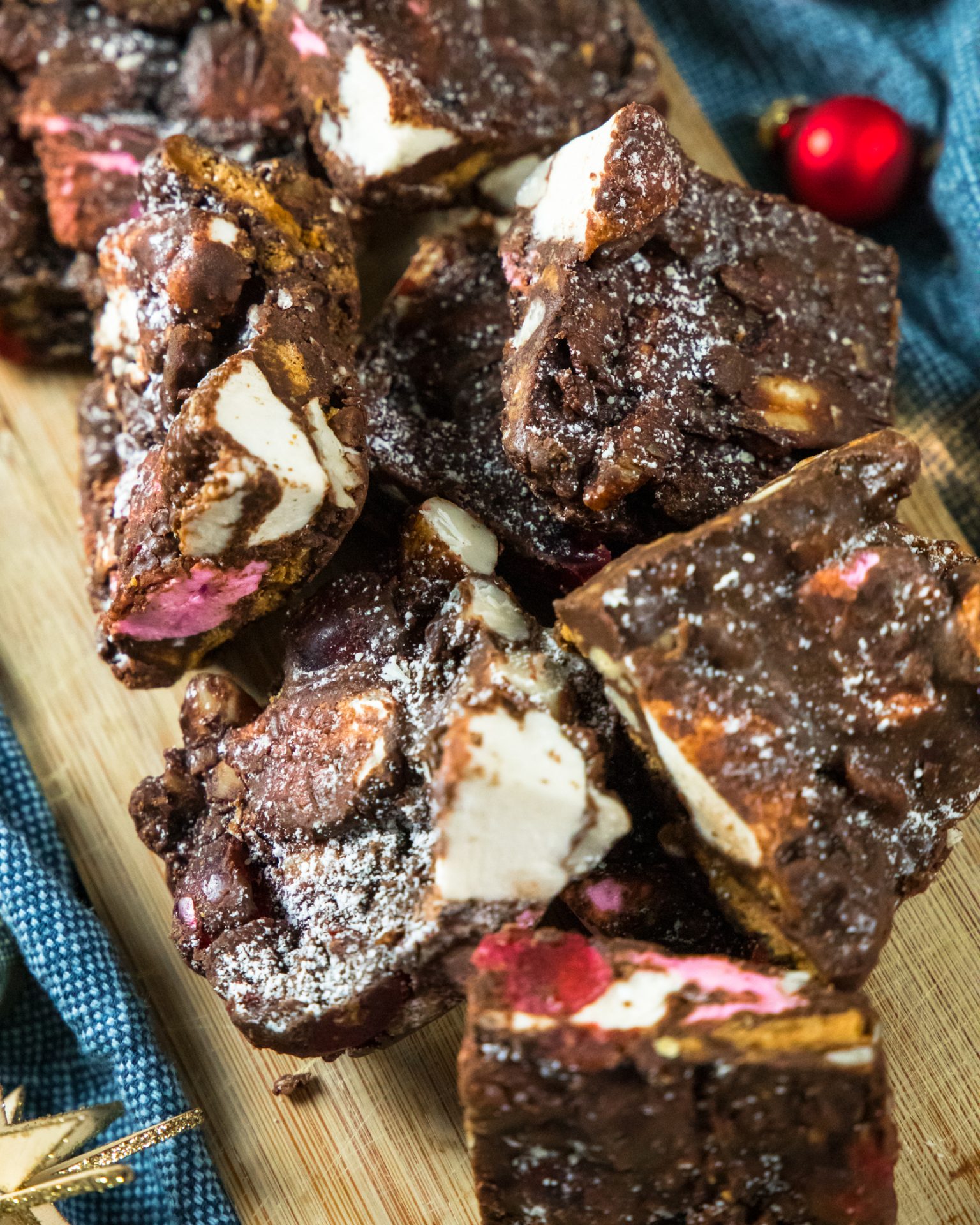 Mate, this vegan rocky road is one of the easiest treats you can make.

My vegan rocky road includes 85% milk-free dark chocolate and vegan marshmallows along with a handful of other tasty ingredients which makes it just as delicious and decadent as you remember without any of the dairy and sad animal products.

I love rocky road. It’s soooooo easy to make – mix up the ingredients with a buttery, syrupy decadent chocolate sauce and set in the fridge before slicing into mouth-watering bars.

If you don’t have time to read the recipe now, PIN this or bookmark this page for later:

Jazz it up for Christmas:

Instead of the usual rich tea biscuits (which are vegan by the way), I’ve thrown in LOTUS BISCOFF (which are also vegan), but they work wonders with the dark chocolate.

In the Christmas spirit, I’ve crammed in some brazil nuts and glacé cherries (as red as Rudolph’s nose), along with snowy white vegan marshmallows. If the snowfall of icing sugar to finish them off isn’t Christmas-y enough for you – feel free to add some edible glitter too!

How have you made rocky road vegan? 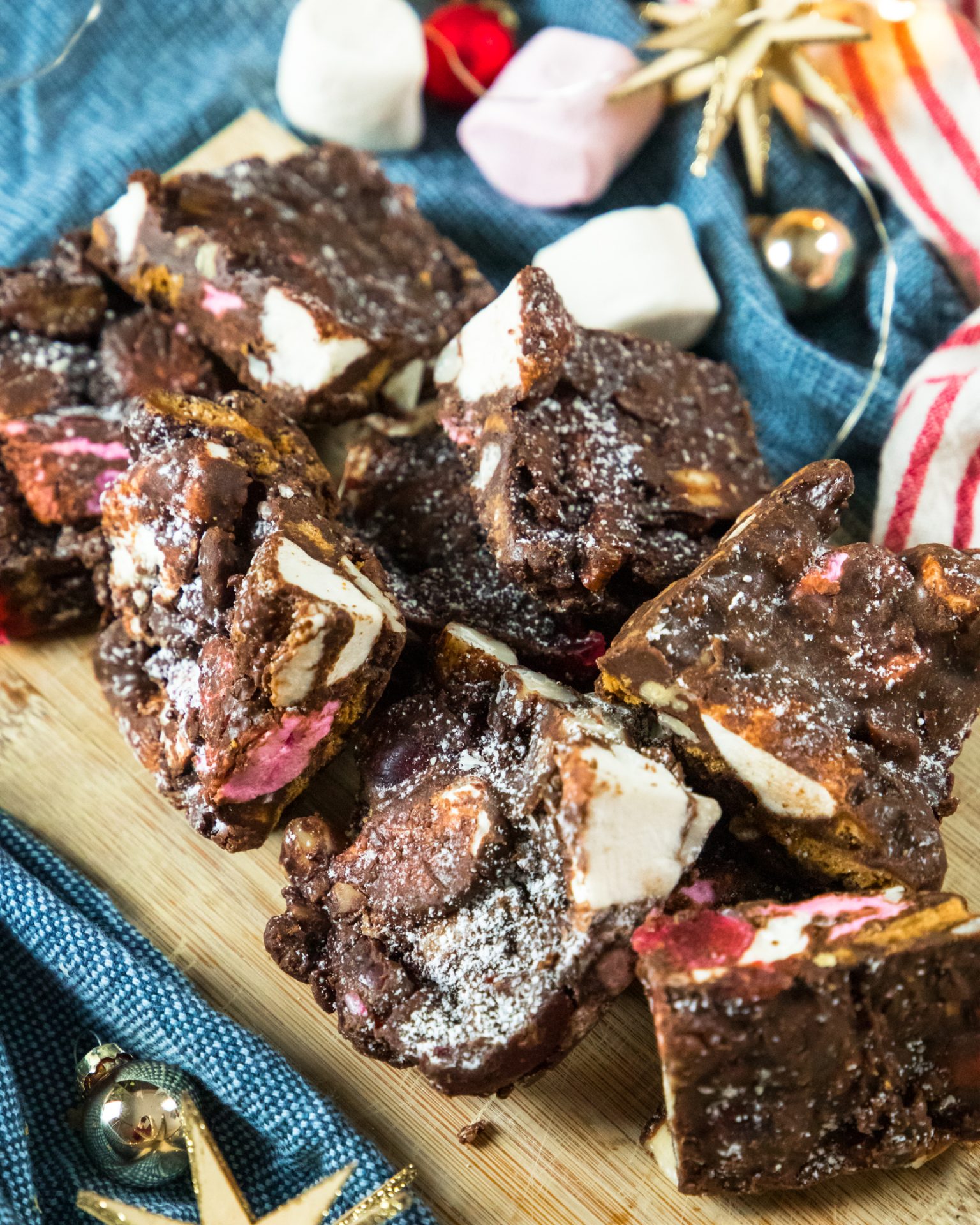 Traditional recipes might use a mixture of dark and milk chocolate. For this vegan rocky road, I’ve kept it to dark chocolate only as most brands are vegan!

Chocolate is made from cacao beans, which are grown on cacao trees. This means that in its rawest form, chocolate is vegan. However, manufacturers begin to add milk to create the different varieties of chocolate you see on the shelves.

Dark chocolate ISN’T often made with milk, and it’s one of the more raw forms of chocolate on supermarket shelves as it has high percentages of cacao.

When you choose a vegan butter, you want something that tastes, acts and behaves very similarly to dairy butter blocks. I tend to use either the Vegan block by Naturli and recently I have favoured Flora’s Plant Butter block which I used for this vegan rocky road. Both offer fantastic results in cakes and general baking.

Much like many sweets, marshmallows contain PORK GELATINE (eurgh). However, Marks & Spencer released their vegan marshmallows which are a godsend for everyone living Life Without Meat and they were perfect for this recipe.

How to turn the vegan rocky road into thoughtful gifts? 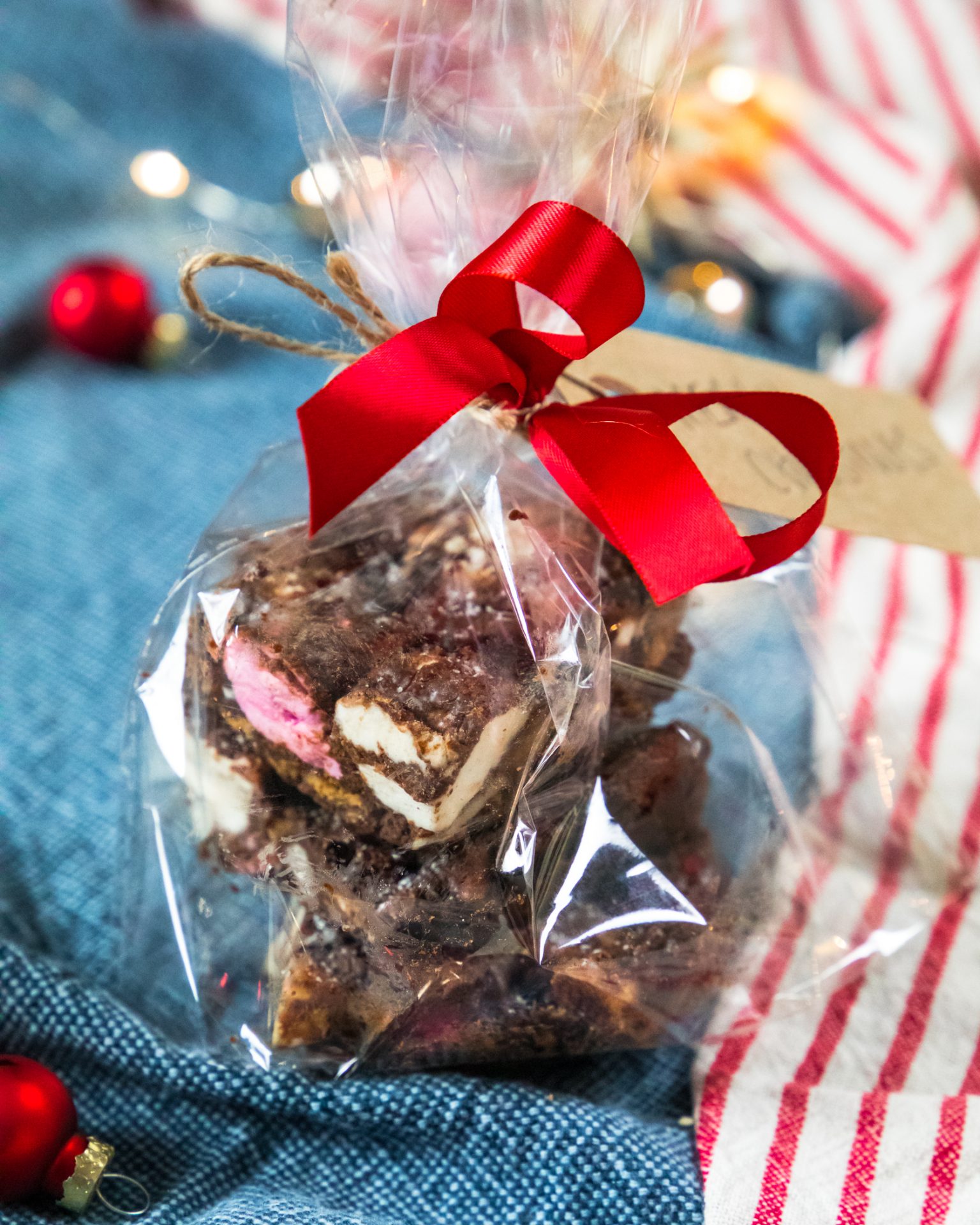 Rocky road is perfect for Christmas gift-giving because it lasts in the fridge for a few weeks.

You can wrap pieces of the rocky road up for small gift-giving or hampers and stocking fillers for Christmas.

With this recipe, you can make eight bags with three pieces in each, tied with a bow. The method for the gift-wrap has featured as part of my Instagram IGTV recipe series, Vegan In Lockdown: Christmas Special. You can watch the series over on Instagram – I released a new episode every week on Monday and Wednesday (6 pm BST) in the lead up to Christmas 2020. 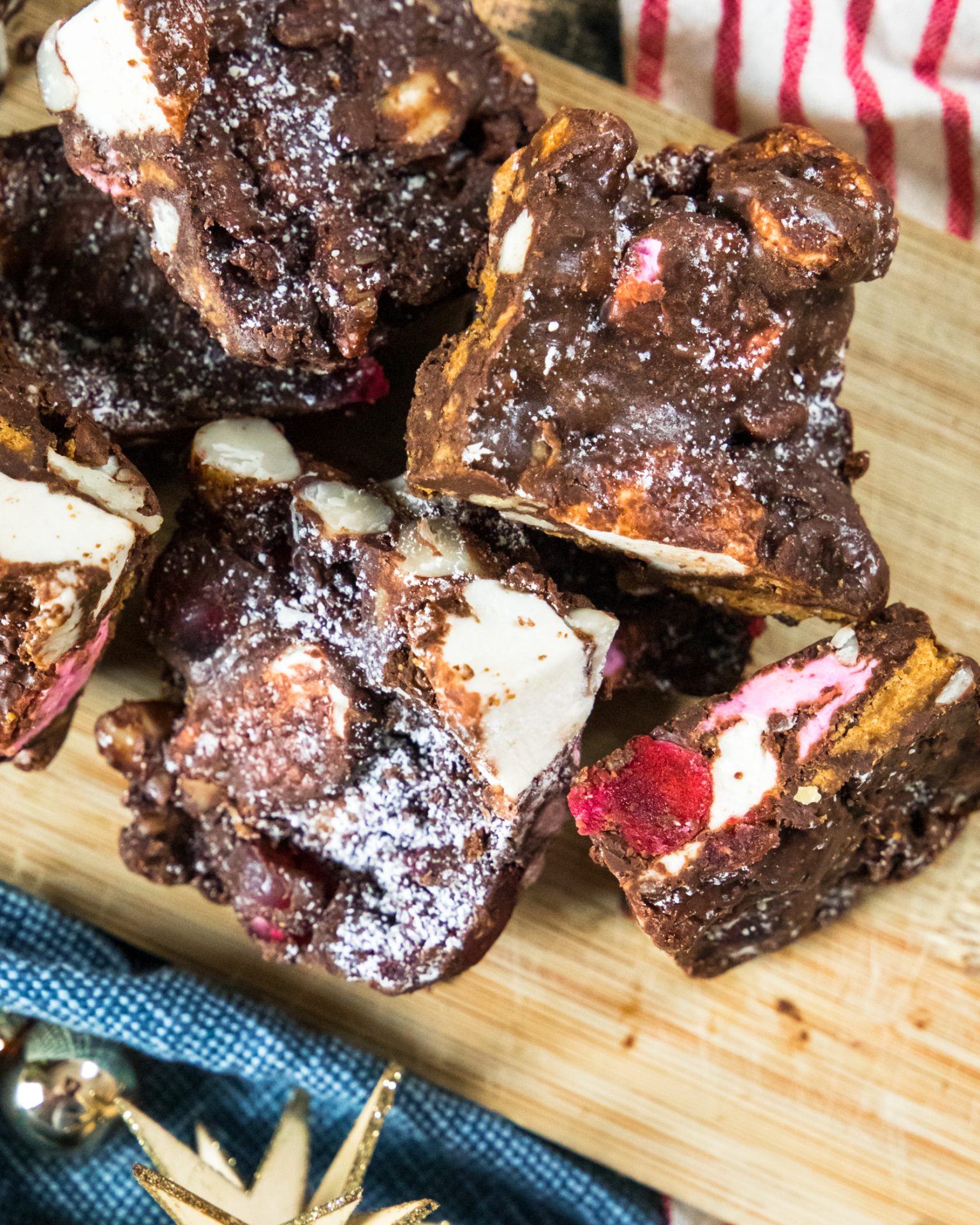 I hope you enjoy my Christmas BISCOFF vegan rocky road! I’d love it if you could leave me some feedback and a cheeky follow on social.