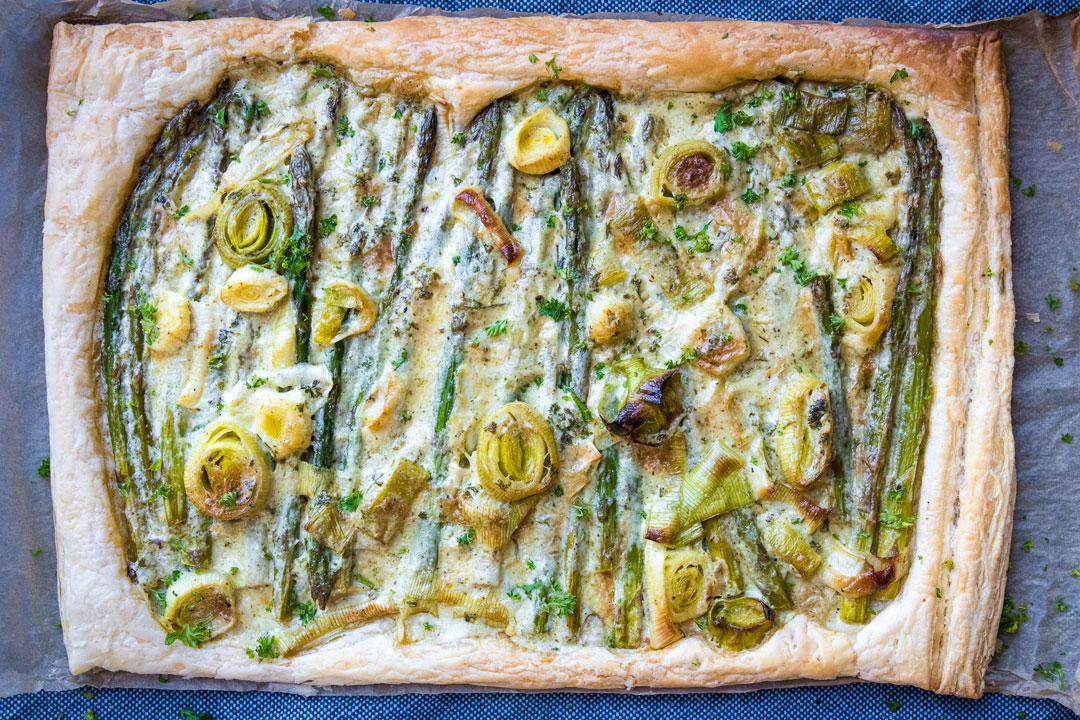 Leeks and asparagus are a couple of my favourite seasonal ingredients. Leeks offer a gentle fragrance, while asparagus offers lovely texture.

They make great additions to all kinds of home-cooking. You can add them to soups, roast them, griddle them, caramelise them; or braise them in dairy-free cream as I have done with this recipe.

If you don’t have time to read through my asparagus and leek puff pastry recipe, then PIN it for later 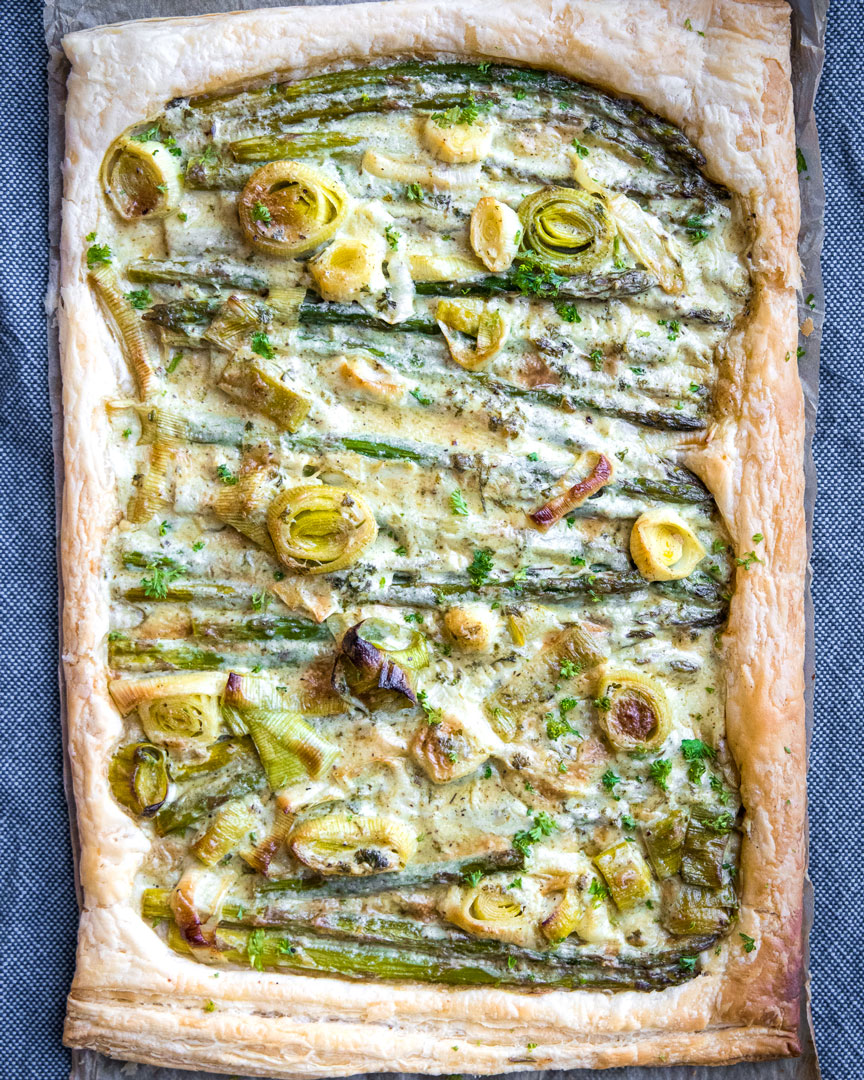 What are the health benefits of asparagus and leek puff pastry?

Leeks offer a distinct flavour, somewhat like an onion though milder in taste. It makes sense given it’s from the allium family of foods which includes: Onions, Garlic, Chives, Leeks, Shallots and Scallions.

Here’s a fun fact – did you know the allium family of foods contain flavonoids that stimulate the production of glutathione. Glutathione is considered the liver’s most potent antioxidant. It provides the liver with excellent assistance to rid the body of toxins and carcinogens.

Like many common greens, asparagus is also low in calories and packed with essential vitamins, minerals and antioxidants.

Both veggies offer you some valuable nutrition, then the seasoning, single vegan cream and puff pastry make it more exciting to eat. 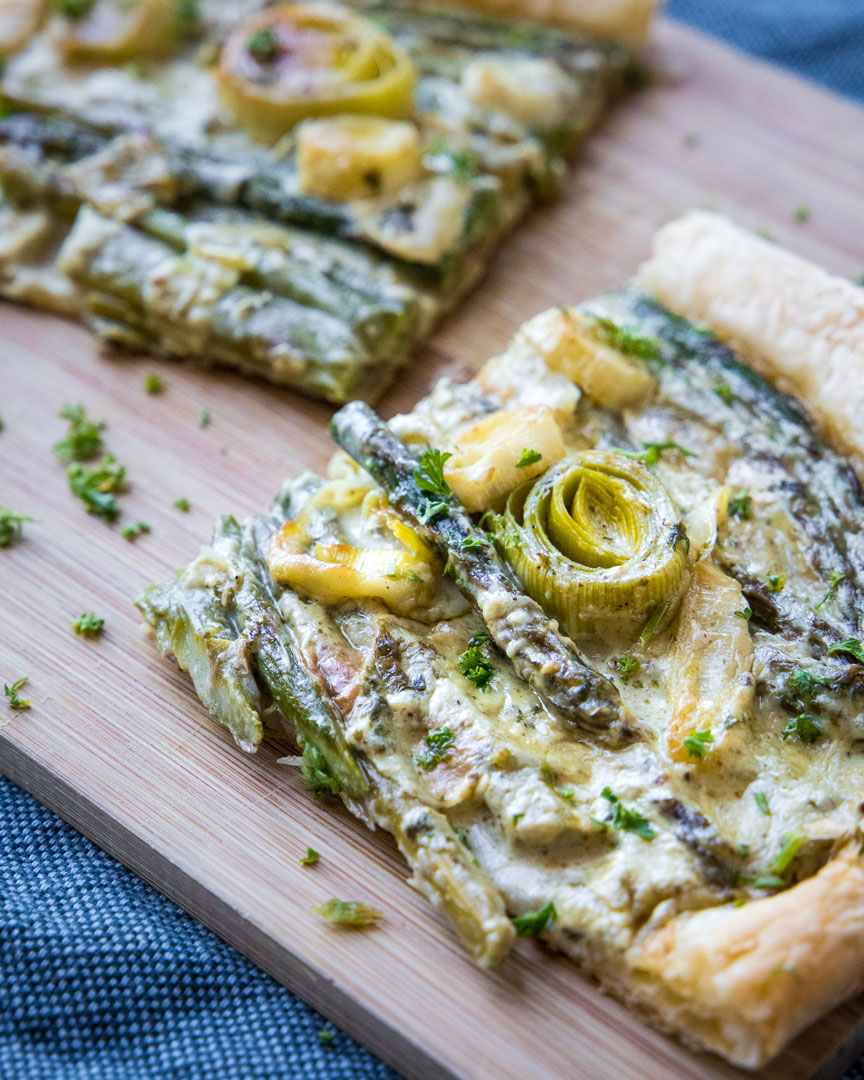 How do you prepare leeks for this puff pastry recipe?

I’m always surprised to hear how many people are put off cooking with certain veggies merely by their appearance. Leeks are quite large and can appear intimidating to beginners in the kitchen. They do look a bit like GIANT spring onions, don’t they?

But they’re a friendly giant – trust me! Not forgetting their lovely flavour.

If you’re new to leeks, you’ll only want to use the tender white and light green parts, found at the lower half of the leek. You can chop or slice those parts before adding them to a recipe. Don’t forget to snip and discard the root end too. The outer greens, or the upper part of the leek, is much darker and tough and may not work for all leek recipes.

Also, due to their layers, it’s essential to thoroughly clean leeks before cooking with them. 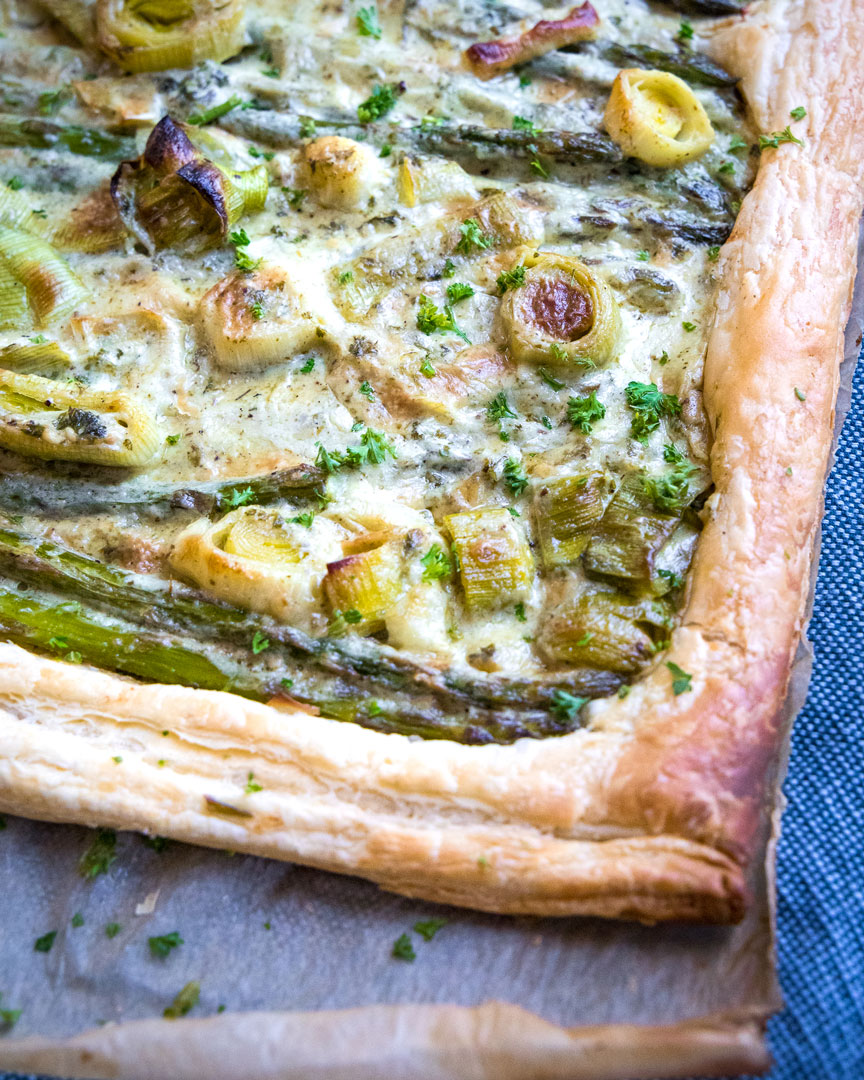 How have you made this asparagus and leek puff pastry vegan?

Traditional homemade puff pastry requires butter, but you can easily sub this out for a dairy-free alternative. The Naturli vegan block would be perfect for this as it has a gorgeous buttery flavour – you can find this in Sainsbury’s (UK). However, Stork’s Original Baking Block (not their margarine) is also vegan

As much as I love to get into making pastry, sometimes I just can’t be arsed (lol). So, if you’re like me, and want a short-cut, then my favourite is the pre-made pastries by Jus-Rol as they’re ALL vegan!

Instead of dairy cream, I have used Alpro’s soy single cream. It works just as well, tastes incredible and cuts out a tonne of saturated fat in comparison to usual dairy. 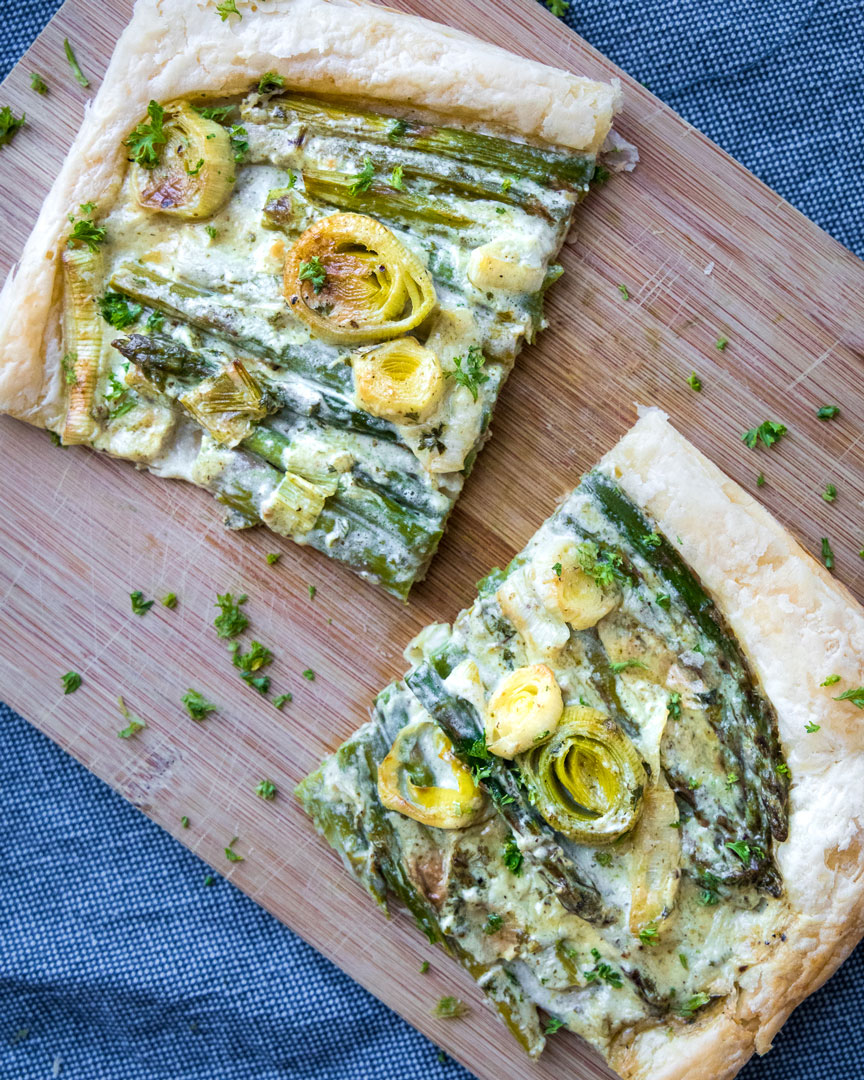 Mate, you honestly wouldn’t think twice about this being vegan. If you’re craving something comforting, creamy and tasty, then this one’s for you. A slice of this and a nice glass of vino in the garden’s sun wouldn’t go amiss ey?

Be sure to leave me a comment, rate this recipe and tag me on Instagram. I love seeing photos of you recreating my recipes – it makes me smile!