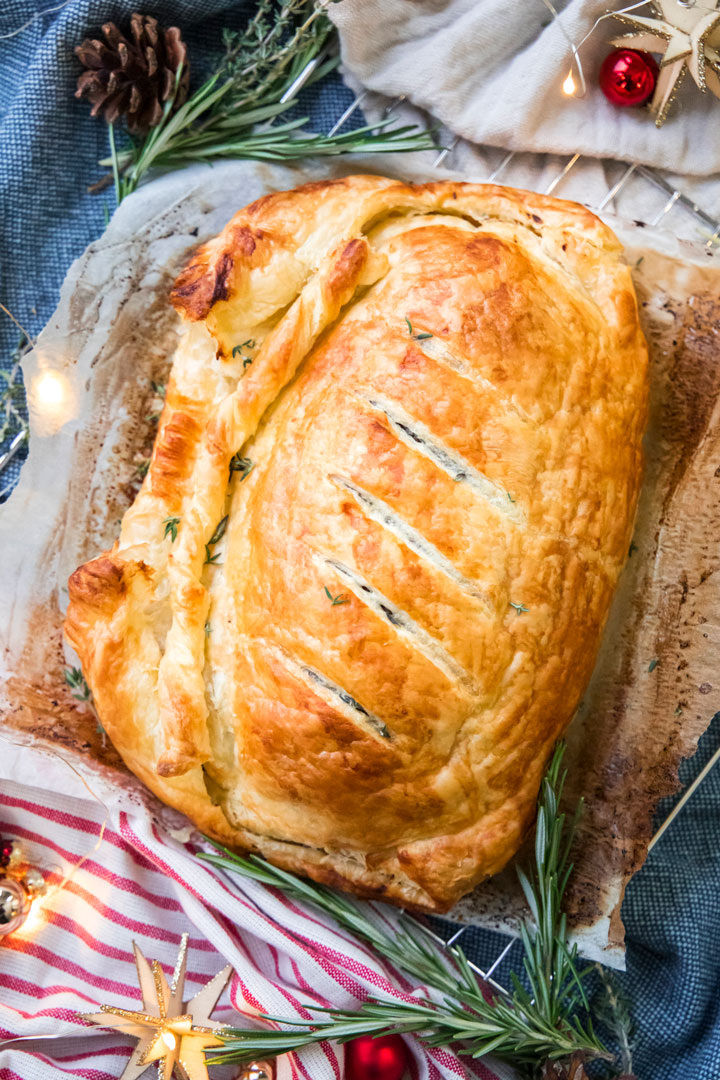 A firm Christmas favourite, and one that’ll turn mushroom haters into mushroom lovers. My meaty vegan mushroom wellington is the perfect little showstopper for Christmas and every roast dinner in between.

My “meaty” vegan mushroom wellington boasts awesome texture with a combination of innovative ingredients and plant-protein. It’s a fun vegan spin on the traditional beef wellington.

The best bit? It’s pretty straightforward and in a bit, I’ll recommend the kitchen tools that make the job even easier.

If you don’t have time to read the recipe for my vegan mushroom wellington, then PIN it for later. 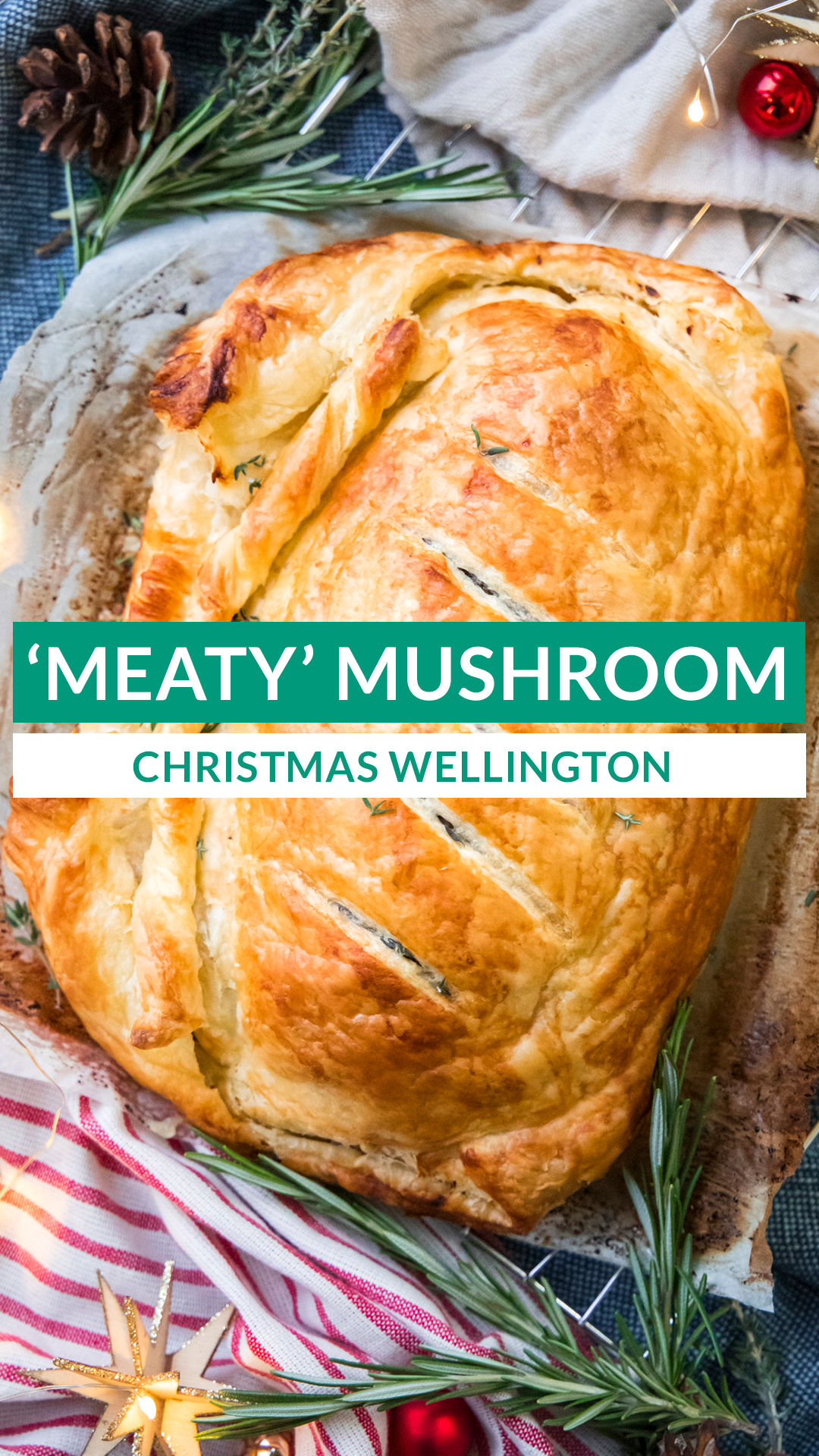 What makes this vegan mushroom wellington so meaty and tasty?

For the main bulk of filling, I have used a combination of chestnut and oyster mushrooms, along with soy mince, jackfruit and chestnuts.

Using a combination of these ingredients creates an inviting array of textures, which are very meat-like when cooked together.

Often people question why meaty textures are popular among vegans. If you’re interested in reading more about this, then take a read of this article.

I have also used Maris Piper potato in this which is one of my favourite kinds – famous for its creamy and fluffy texture. The potato soaks up loads of flavour and juices from the filling once in the oven. LOVE IT!

Due to the lovely textures and flavour, this vegan mushroom wellington will please vegans and win over your meat-eating friends and family too. I promise! 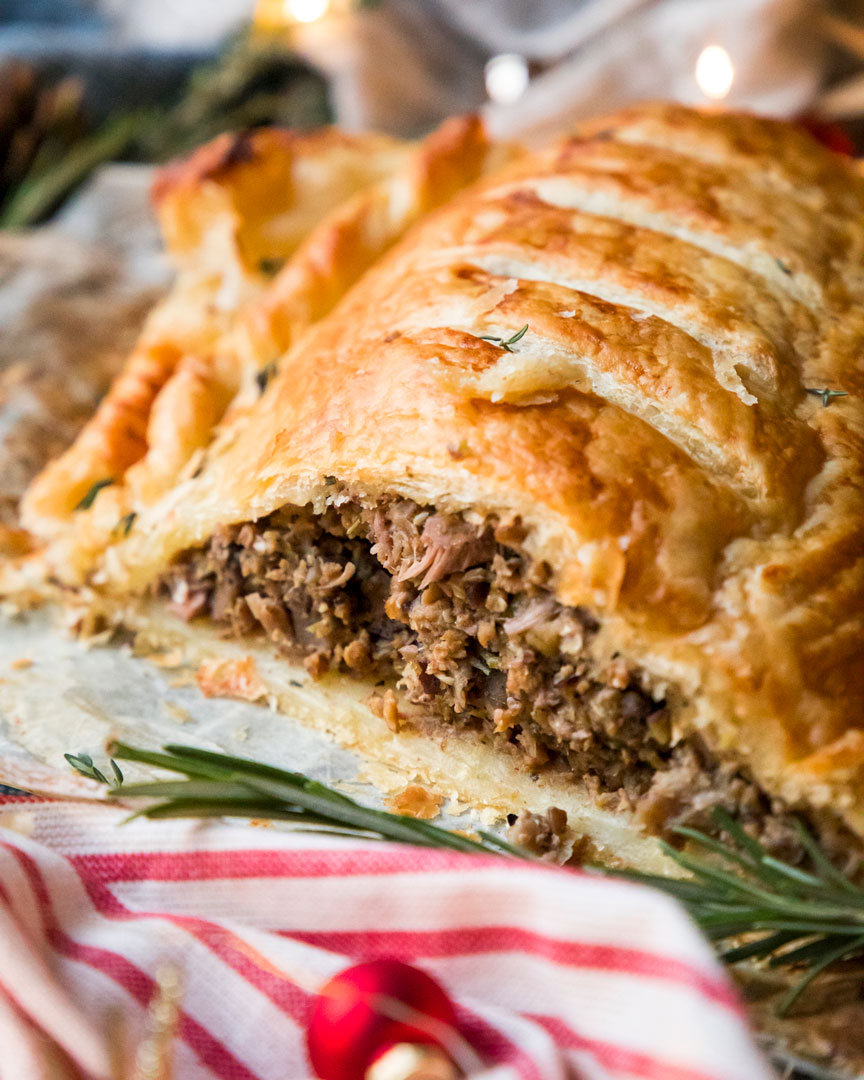 Jackfruit is well known for its high dietary fibre, and mushrooms are a powerful superfood. The soy mince packs in a load of protein and the chestnuts? Well, it’d be rude not to use chestnuts at Christmas; but they do lend a smoky and slightly sweet flavour.

With their umami flavour and meaty texture, Oyster mushrooms are perfect as a meat substitute in vegan cooking. Their texture is often likened to abalone or scallops, which makes them a versatile option for vegan ‘seafood’ dishes as well.

They provide some awesome meaty texture in this recipe too! 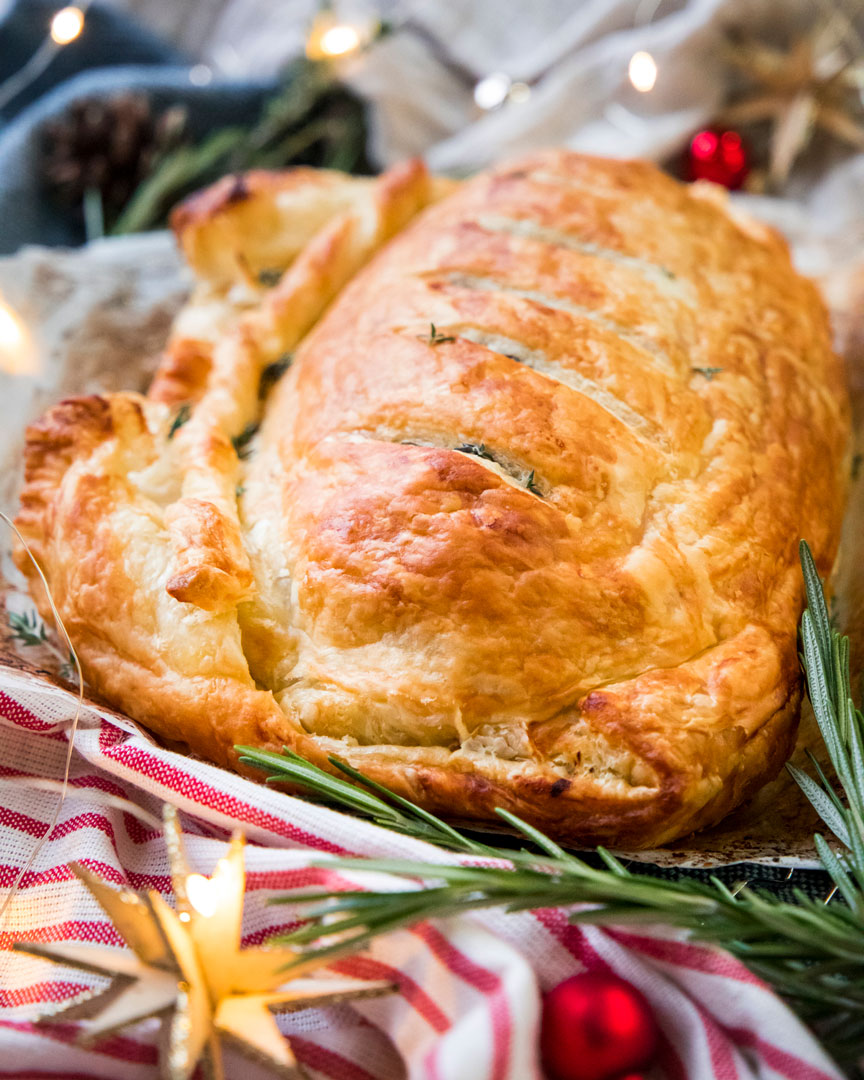 In recent developments of scientific research, studies have found that Oyster mushrooms produce Lovastatin naturally, which is a drug used in treating excessive blood cholesterol.

They are also known to have incredibly high levels of the antioxidant, ergothioneine, which is widely known to decrease inflammation within the body and lower the risk of cardiovascular disease.

Therefore, oyster mushrooms are a brilliant superfood to incorporate into your cooking. 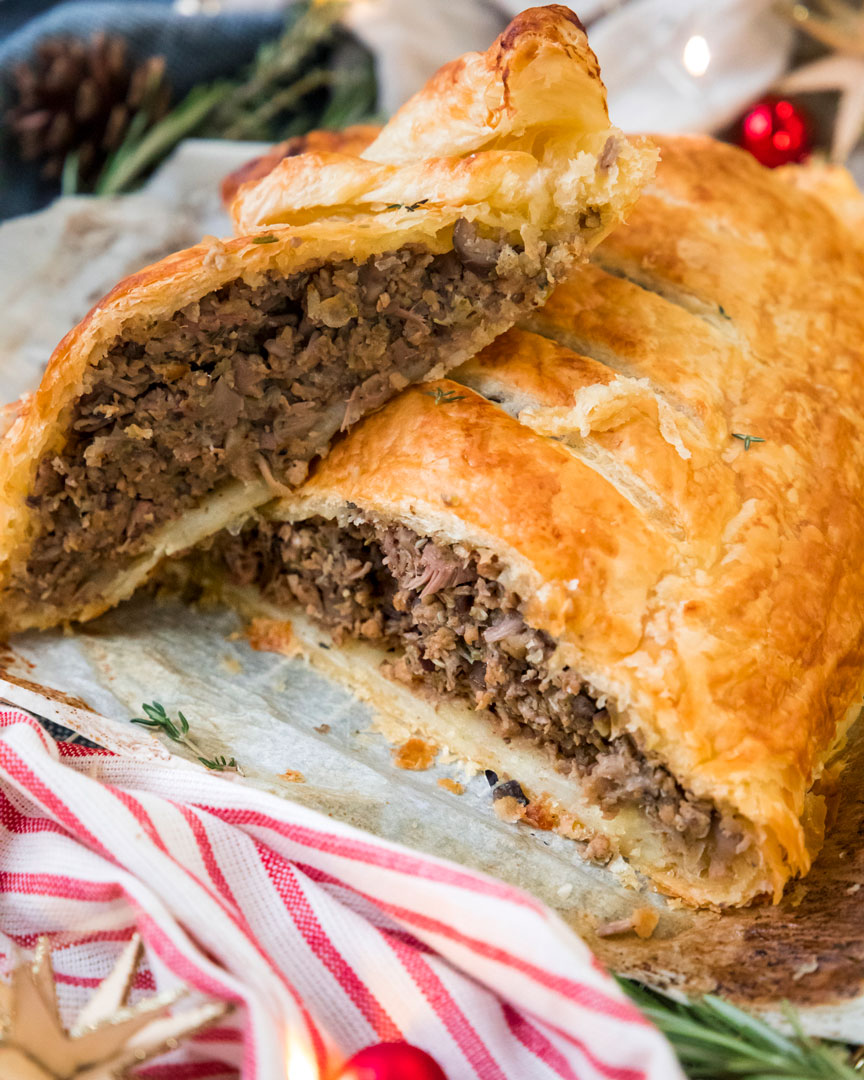 Traditional homemade puff pastry recipes aren’t vegan. They require butter, but you can easily sub this out for a dairy-free alternative.

There are plenty of benefits to going dairy-free – if you fancy reading more, then check out this article.

When choosing a vegan butter for this kind of baking, then you’ll want to select one that acts very similarly to dairy butter blocks. My current favourites are:

Both have a lovely flavour and work fantastic in cooking and baking. Also, I believe Stork’s Original Baking Block (not their margarine) is vegan.

As much as I love to get into making pastry, sometimes I want a quick cheat. So, if you’re like me and want a short-cut, then my favourite is pre-made puff pastry sheets. Jus Rol and most supermarket-own brands are vegan – double-check the label when you’re next shopping.

I’m a firm believer that having the right tools in your kitchen makes home-cooking soooooo much easier. For this recipe, I highly recommend the following: 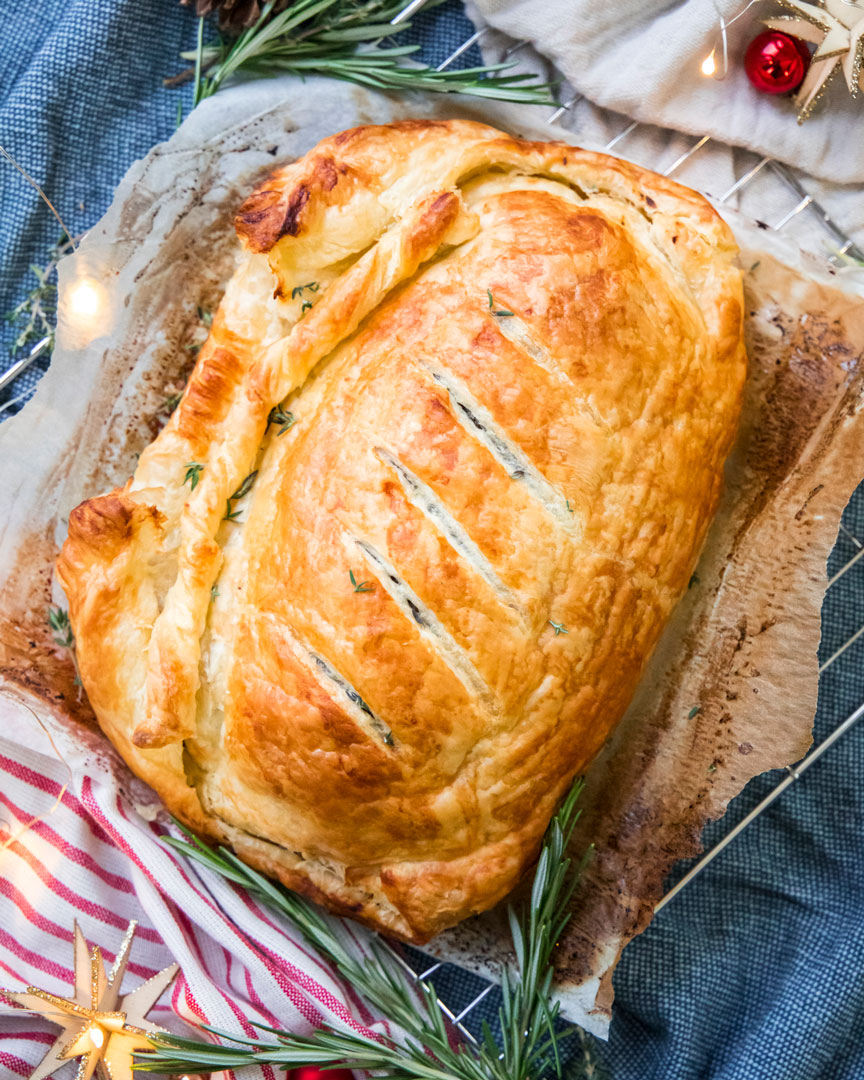 What I love about this recipe, is that you can make it in stages, making the filling a day ahead, refrigerating, then loading it onto the pastry and baking right before your meal.

This recipe has featured as part of my Instagram IGTV recipe series, Vegan In Lockdown: Christmas Special. You can watch the series over on Instagram – I release a new episode every week on Monday and Wednesday (6pm BST) in the lead up to Christmas 2020.

I hope you enjoy this recipe – it’s the perfect little showstopper to your vegan Christmas. I’d love it if you could leave me some feedback and a cheeky follow on social.