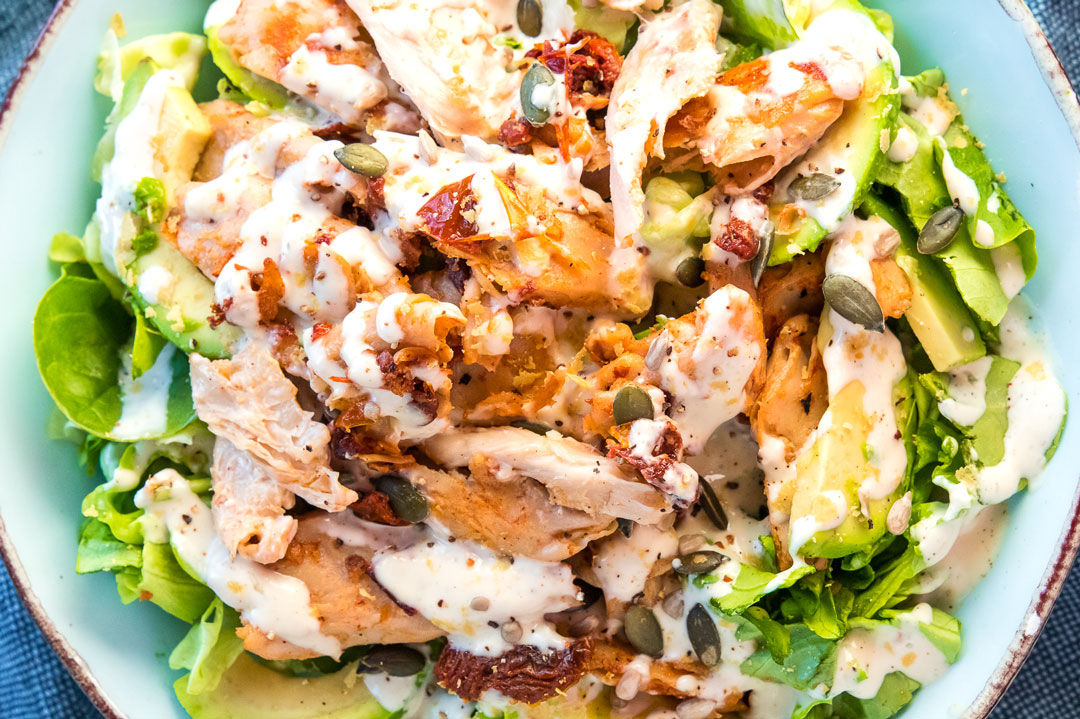 This vegan chicken Caesar salad has all the tanginess and creaminess that you’d expect from a traditional Caesar salad, but it’s completely plant-based!

This vegan chicken caesar salad is so tasty, delicious and importantly, FILLING.

You can layer up a bunch of crunchy salad leaves, greens, avocado slices, tomatoes, cucumber etc – anything you fancy really. Then I fried off some bite-size soy chicken strips with some sun-dried tomatoes and fresh garlic in a little olive oil.

Finally, I whisked up this creamy and flavoursome vegan Caesar dressing which I drizzled over the top along with a sprinkling of seeds for extra crunch and nutrition.

If you don’t have time to read the recipe for this creamy vegan chicken Caesar salad, then PIN it for later! 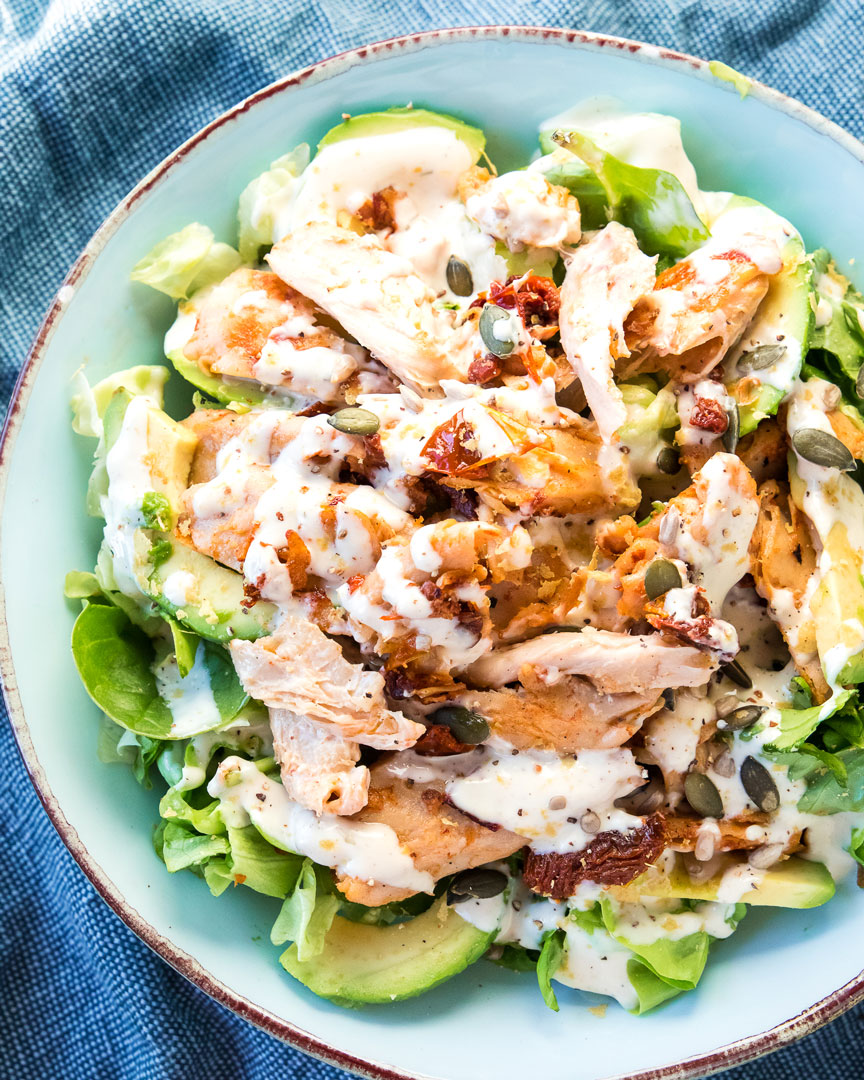 What are good vegan chicken options for this Caesar salad?

For this recipe, I have used Iceland’s No Bull Chick Chunks which are made from soy and very affordable. I fried these off in the pan with some garlic, olive oil and sun-dried tomato. Other supermarket options which would work well for this cooking method include:

Alternatively, here are some options which you can cook in the oven and serve with your salad:

A more healthy option would be whole-food plant-protein. Examples include:

What is soy and is it healthy? 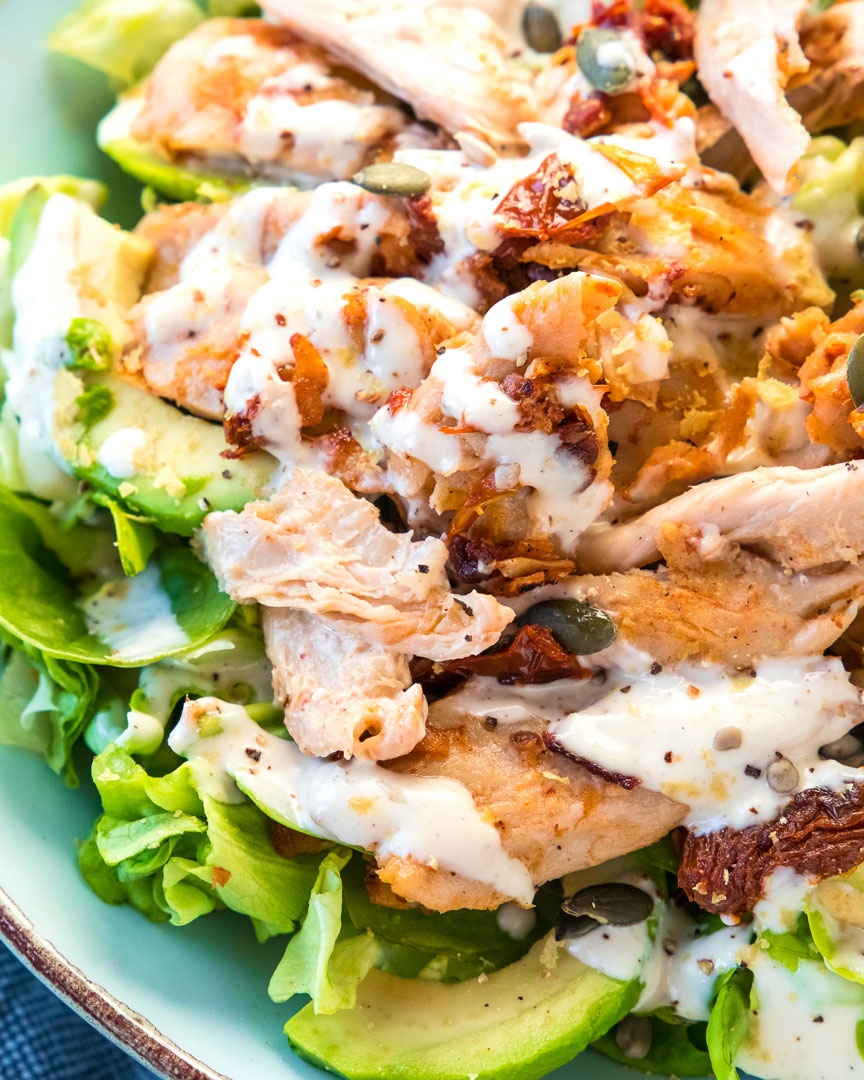 You’ll notice soy protein is often used in vegan meats, and it’s what I have used for this vegan chicken Caesar salad.

Tofu, tempeh and edamame all originate from soybeans too.

Soybeans are considered a whole source of protein a.k.a ‘complete protein’. This means that they provide your body with all the essential amino acids it needs. Therefore, making all forms of soy protein a very healthy plant-based alternative to eating meat.

Plus, eating plant-based allows you to make a positive impact on the environment, and skip out the saturated fat content found in meat which benefits your health. You can read more about the benefits of going meat-free here.

Edamame beans are young soybeans which need to be steamed/boiled before consumption. I first tried them when I travelled and absolutely loved them. They’re really high in protein and rich in folate, vitamin K and fibre. They would be a great protein addition to this salad if you have some. Before now, I’ve found some in the frozen section next to peas – they’re healthy and very affordable!

Soy is often criticised as many rainforests around the world have been destroyed to make room for more soy. However, it’s important to note that over 70% of the world’s soy is fed directly to livestock in the form of protein-enriched feed. Only 6% is turned into human food. This provides more motive for living life without meat and suggests soy isn’t all bad if it were used for human food alone.

As the soy industry grows, a lot of soy is genetically modified and treated with pesticides. Therefore, look out for organic and GMO-free brands, or even make your own to decrease your environmental impact.

How do you make vegan Caesar salad dressing? 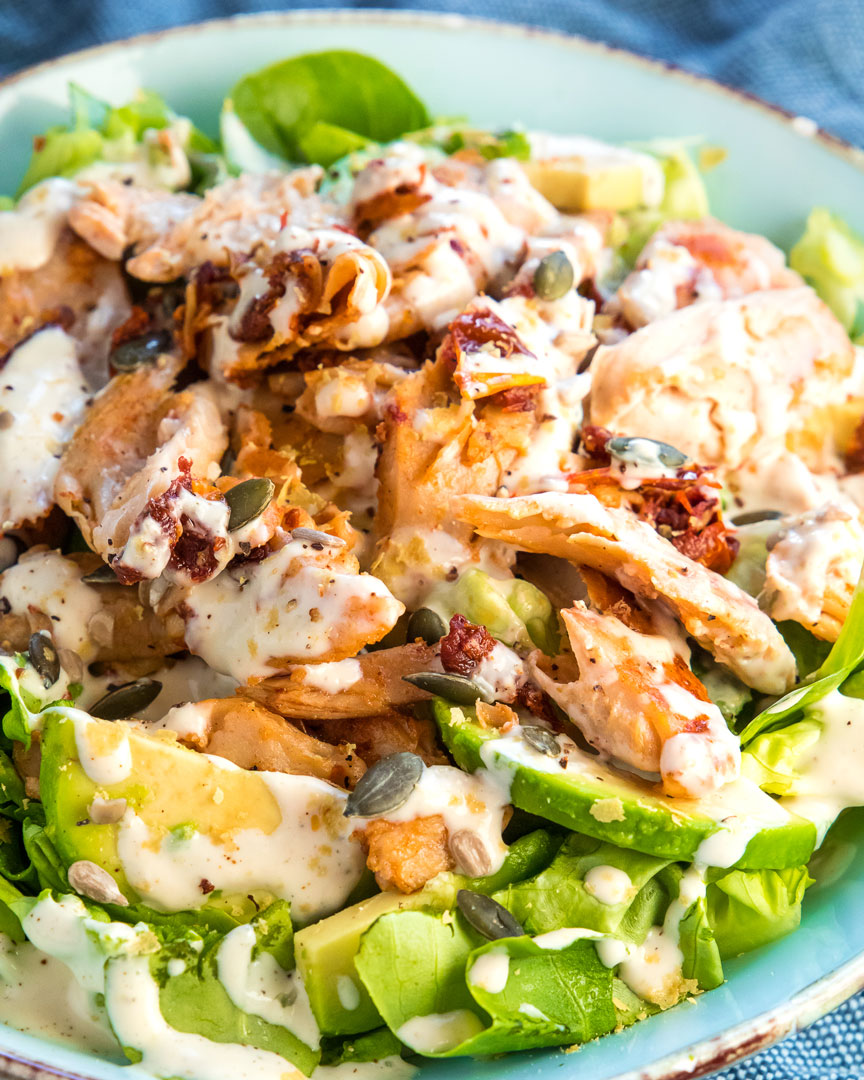 In traditional Caesar dressing you’ll find a few animal-derived ingredients which can include:

The remaining ingredients in traditional Caesar dressing are plant-based so it’s a simple case of subbing out the non-vegan ingredients for a vegan alternative to create similar taste and texture.

Then the combination of lemon, garlic, black pepper and mustard create that tanginess you’re so used to. You could even add some nutritional yeast if you have some – this would replicate the subtle ‘cheesy’ flavour that parmesan would be used for. Alternatively, just sprinkle over some at the end as I have.

In some recipes, you might see crispy ham or bacon incorporated into the salad. In its place, I fried off some sundried tomato which crisps up and adds a nice texture and small pops of sweetness.

This is a very tasty and filling salad to sit down and enjoy Summer with! It’s very easy to make and so close to the real thing you’ll be blown away by the flavour and texture.

I’d love to hear your feedback in the comments once you’ve tried my vegan chicken Caesar salad. I’m sure you will adore the taste and be delighted by how yummy a Life Without Meat can be.

If you’ve bought vegan chicken that cooks in the oven, then simply pre-heat your oven, to begin with, and get these into cook as soon as you can. Then use their cooking time to fry off the sun-dried tomatoes and prepare the rest of the salad.