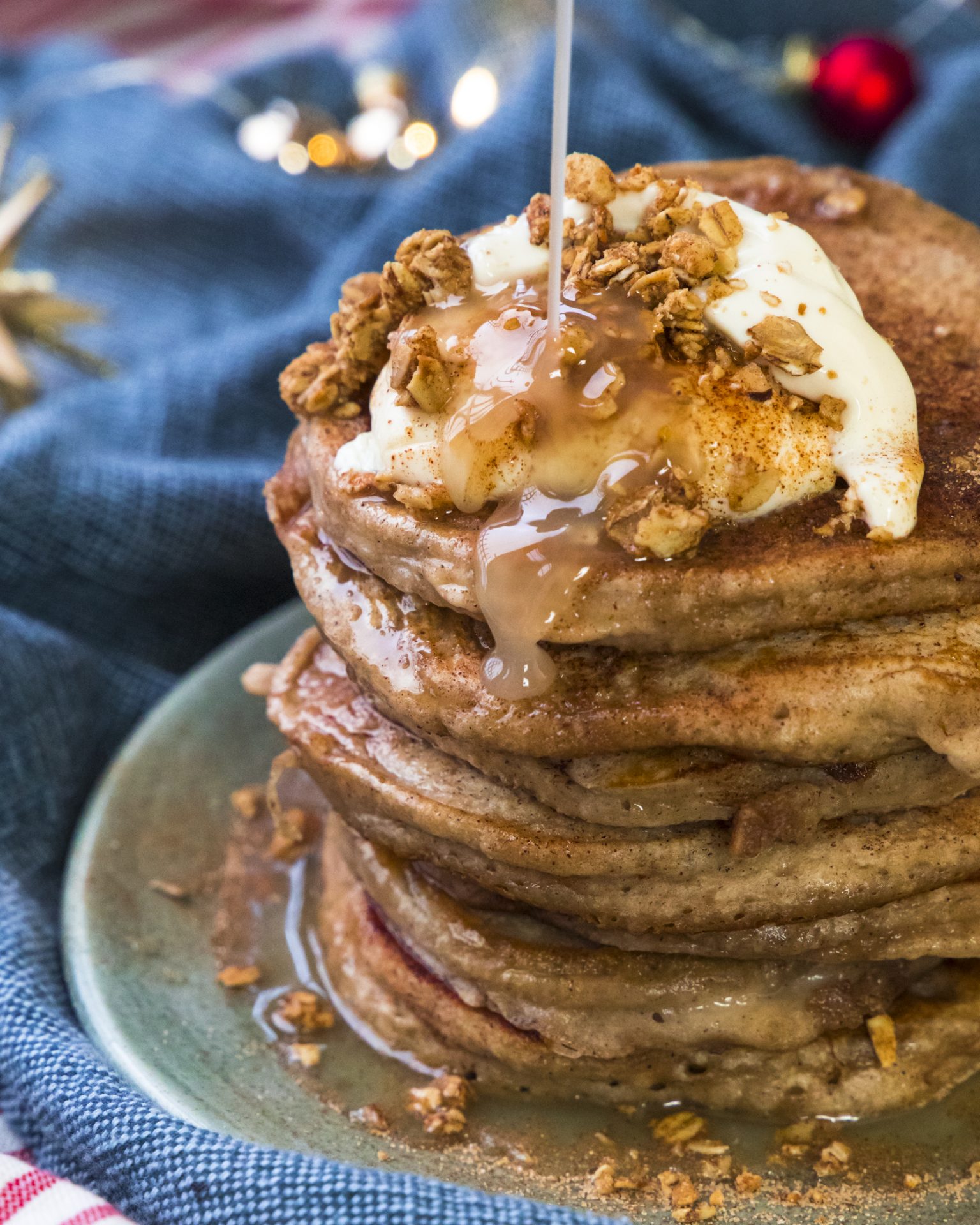 These vegan cinnamon roll pancakes are the perfect Christmas treat for breakfast over the festive season.

Two of my favourite things combined in one – you’ve got the gorgeous warm cinnamon sugar spice with the lovely texture of thick and fluffy pancakes. My warm ‘n’ fuzzy vegan cinnamon roll pancakes are delightful for lazy weekend breakfasts.

Plus, they’re vegan – even better!

If you don’t have time to read and drool over this recipe now – feel free to PIN it or bookmark this page to come back later.

Cinnamon roll pancakes have been made by tonnes of food bloggers, but I wanted to create a recipe which is both easy and vegan! Plus, I’ll let you in on a few tips for a nice fluffy rise.

No eggs? No problem!

My secret to creating a lovely rise without eggs is with a bit of baking powder and sea salt. Plus, I have used self-raising flour.

Along with these ingredients, you also want to put some effort into mixing them. It’s essential to incorporate a bit of air when mixing in the flour – much like you would with cakes. It’s a great way to encourage a nice rise.

Using a stand mixer would do the work for you, but I think that’s too much washing up for one batch of pancakes (haha).

They are EASY PEASY:

These pancakes are legit so easy, and they only require eight ingredients:

That’s it. You’ll likely have most on hand in the cupboard.

Even better – they’re ready in 1 hour depending on how many you can cook at one time in the pan.

What to serve with vegan cinnamon roll pancakes? 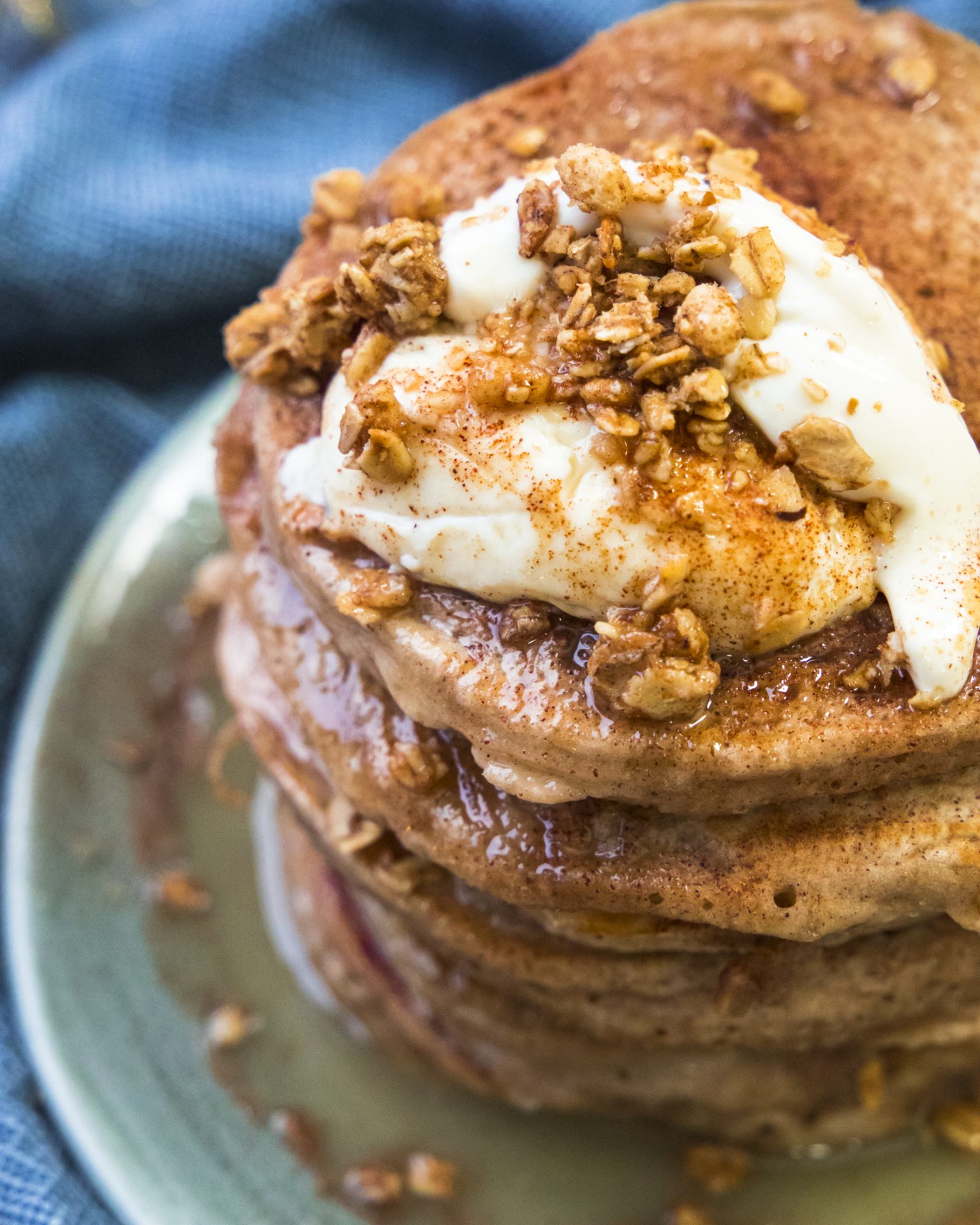 I have prepared the following toppings:

While the glaze is optional, the pancakes wouldn’t be the same without it. The glaze is very easy to make so totally worth it.

These pancakes really do ooze cinnamon rolls, and the smell of them cooking will fill your home with warm fuzzy festive cinnamon.

Follow them with a crisp Christmas walk, and you’ve got yourself a perfect start to Christmas day. 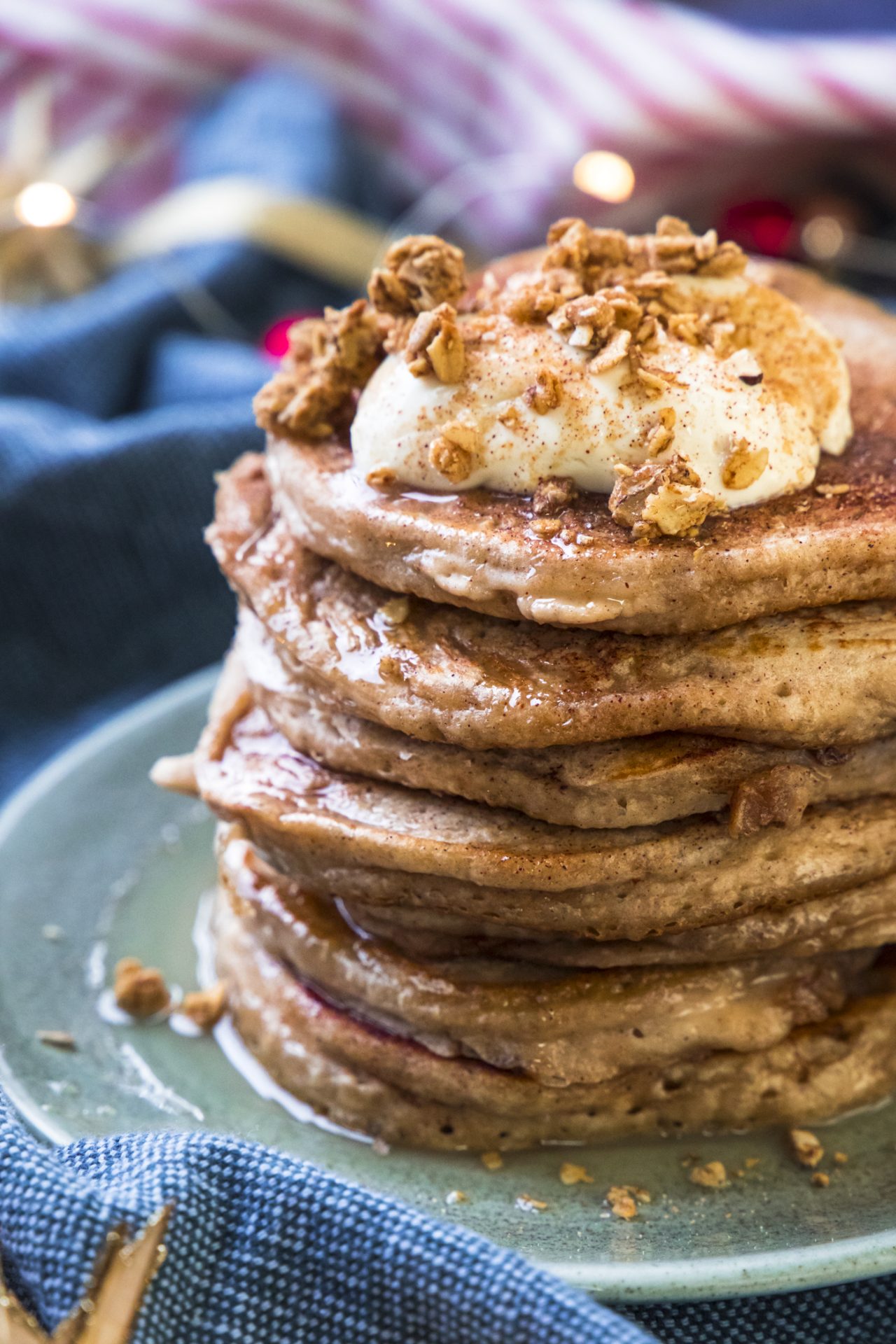 This recipe has featured as part of my Instagram IGTV recipe series, Vegan In Lockdown: Christmas Special. You can watch the series over on Instagram – I release a new episode every week on Monday and Wednesday (6 pm BST) in the lead up to Christmas 2020.

I hope you enjoy this recipe. I’d love it if you could leave me some feedback and a cheeky follow on social.