One of the main foundations of your vegan Christmas dinner, and every roast dinner in between, is tasty roasted vegetables. I want to show you how to make a delicious vegan version of honey roast parsnips and share with you my top tips for glorious roast potatoes.

Instead of honey, I’ll be using lovely maple syrup for my vegan Christmas dinner; and shortly I’ll reveal my top tips for the best roasties.

If you don’t have time to read through this recipe now, PIN it for later! 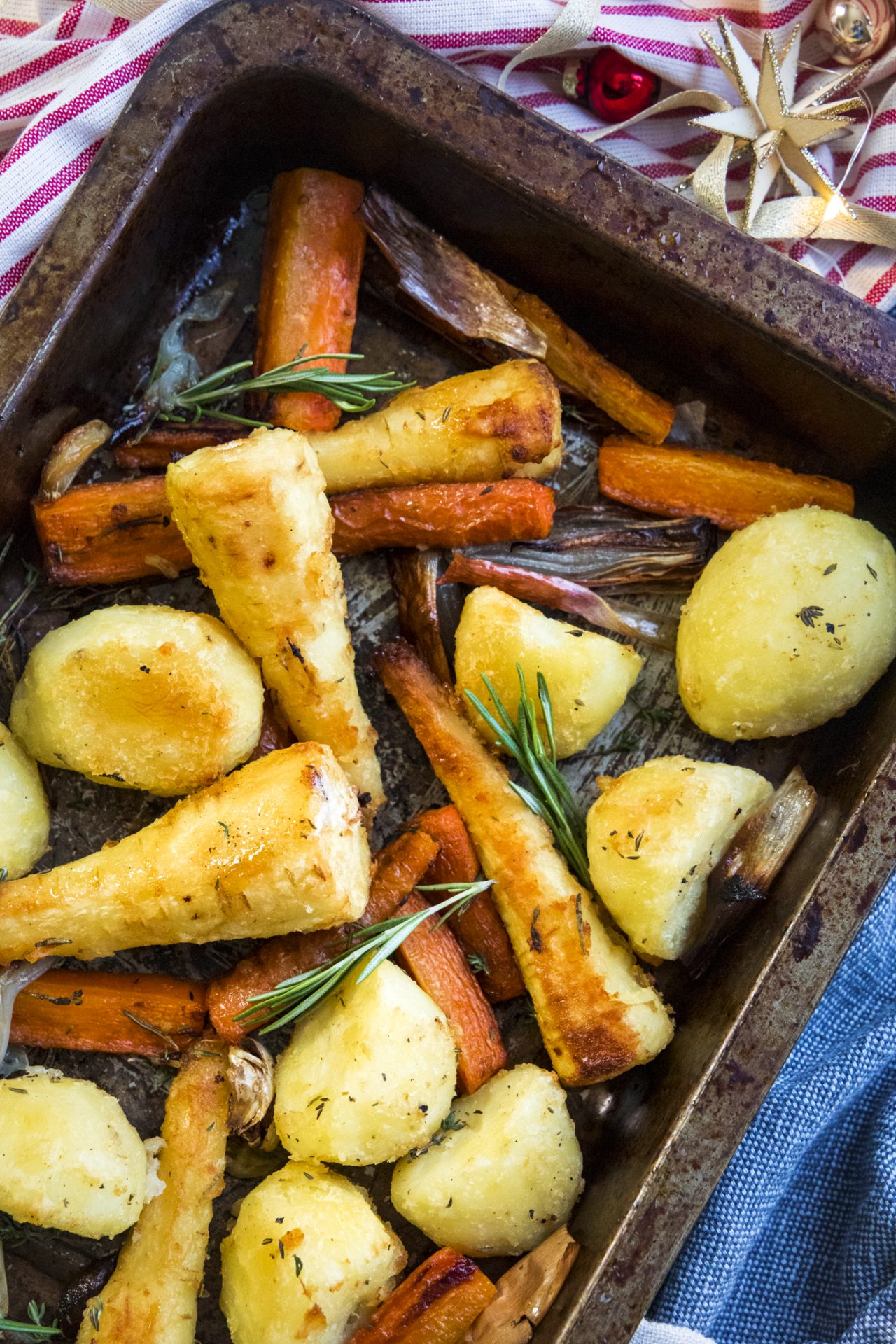 For many years, honey has been renowned for its taste and multitude of health benefits. However, due to the industrial nature of food production and modern-day demands, the process of honey-making on a large scale is very different from how nature intended.

Commercial honey production and unnatural methods lead to weakened immune systems among bees and leave them vulnerable to infection, which may have contributed, in part, to the decline in our bee population.

For this reason (and others), many vegans choose not to consume honey, whereas others have no issue in purchasing local, raw honey. This is cause for discussion but I think it’s about making a personal and well-educated decision.

There are many brilliant natural alternatives to honey which I use in its place. Examples include:

For my parsnips, I’ll be using maple syrup!

TOP TIP: if you can find parsnips which are slightly smaller in size, they are often sweeter, so they make an excellent option for your Christmas dinner. 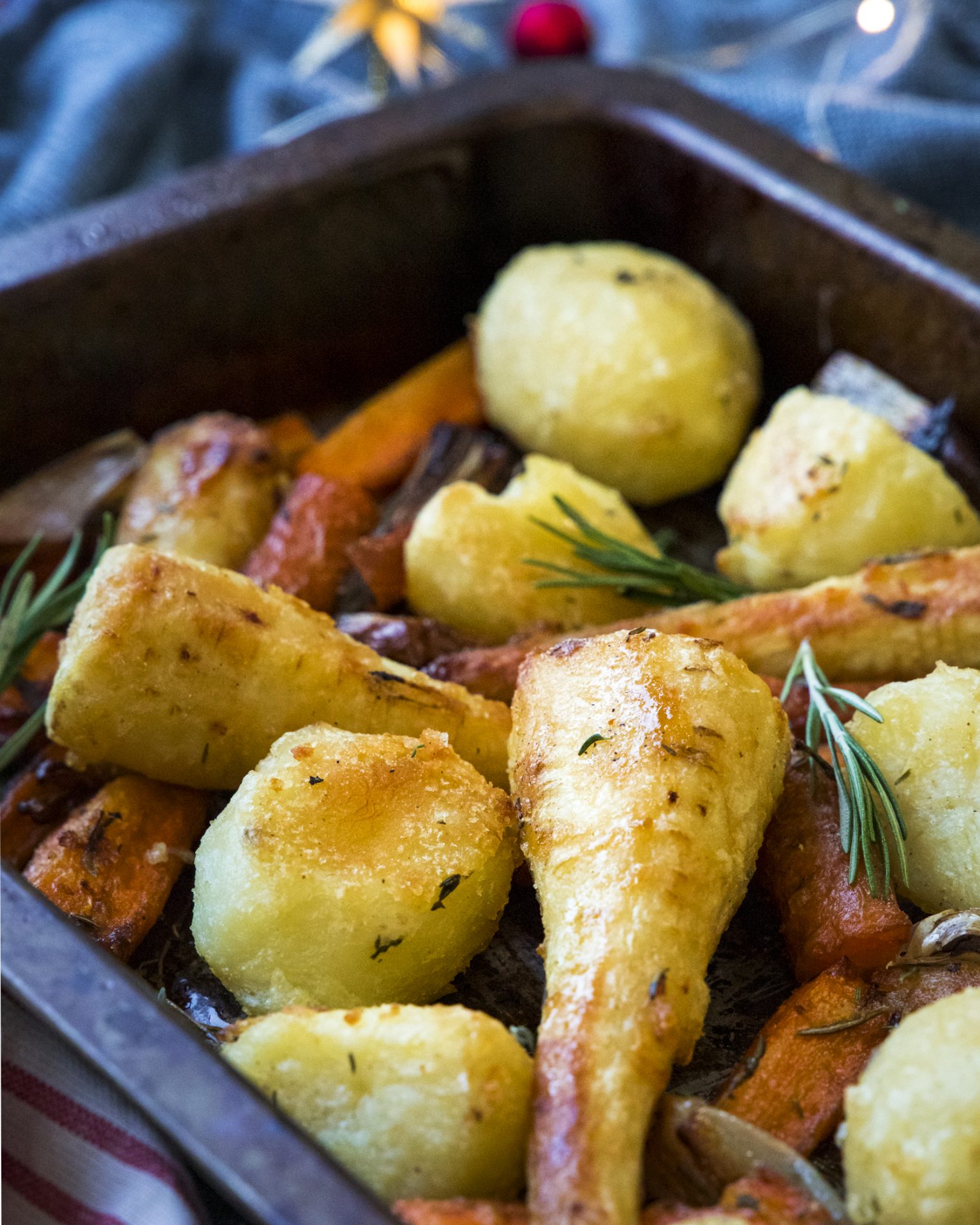 I love using Maris Piper and King Edward potatoes as they are known to be the best variety of spud for roasties. They crisp up superbly, and their floury texture and high starch are what gives you the really light and fluffy centred roast potatoes. They’re a little bit more expensive than standard potatoes, but the extra pennies are totally worth it – it’s Christmas after all!

Make sure you heat the oil in the roasting tin before the potatoes and parsnips go into it. This is another way to help crisp the edges and makes them delightfully crunchy to bite into once cooked. Instead of goose fat (no need for it), simply use a neutral oil (e.g. vegetable oil) for a vegan-friendly alternative.

Create texture by ‘chuffing’ the potatoes:

Once you’ve parboiled and drained your potatoes, toss them in the colander until the edges have roughened. This process is called ‘chuffing’. It’s a great technique for crisping as it allows more oil to crisp around the surface of the potato and parsnip.

When roasting, ensure that you keep your potatoes in a single layer rather than layered on top of each other. Use an extra tray if need be, but by doing this, you will ensure the potatoes cook and crisp up nice and evenly.

I’ve paired my roasties with some fresh rosemary, thyme, crushed shallot and garlic cloves to create some lovely flavour. I’ve also sprinkled over some sea salt and black pepper.

You could even add shavings of clementine as this would pair well with the woody herbs to create an excellent depth of flavour.

Why do you parboil the potatoes and parsnips?

With your potatoes and parsnip, you don’t want to cook them entirely on the hob. You just want to parboil them which basically means they partly cook and then finish cooking in the oven.

Not only does parboiling save you time but can help your kitchen run more efficiently and effectively as well! Especially at Christmas – because the cooking time will be more in sync with other parts of the dinner. 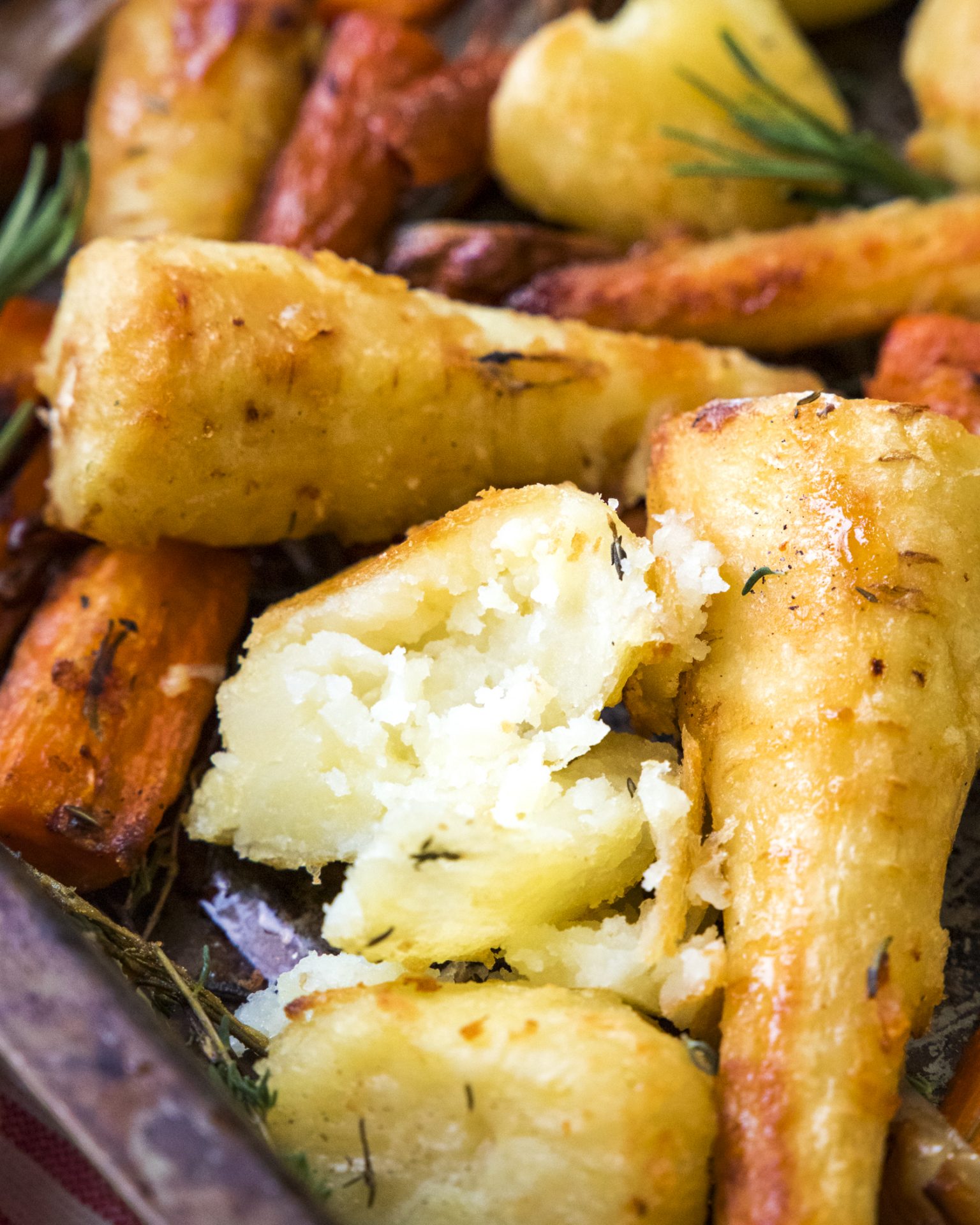 Roast potatoes and ‘honey’ roast parsnips are one of the key delights to any Christmas dinner – they really can make or break your festive feast!

This recipe has featured as part of my Instagram IGTV recipe series, Vegan In Lockdown: Christmas Special. You can watch the series over on Instagram – I release a new episode every week on Monday and Wednesday (6 pm BST) in the lead up to Christmas 2020.

I hope you enjoy this recipe – it’s not a vegan Christmas without ‘honey’ roast parsnips and crispy roasties. I’d love it if you could leave me some feedback and a cheeky follow on social.