Beetroot is in season from July through to January, so it can be a great vegetable to cook with during Autumn and Winter months. For that reason, this beet bruschetta can be the perfect starter for Sunday and Christmas dinners. It’s also a nice idea for dinner parties and even makes a tasty light lunch on its own. 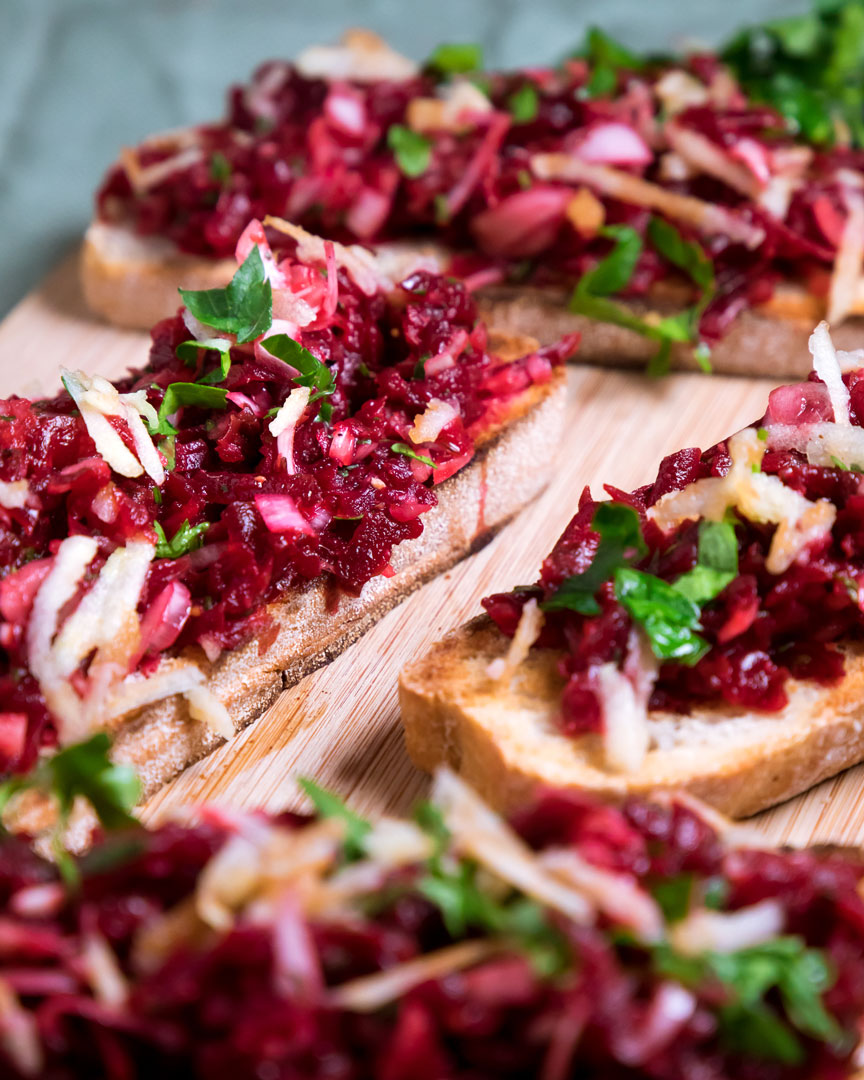 Personally, I’ve not always been a fan of beetroot, but since living Life Without Meat, I’ve experimented with it more and have come to LOVE it. It’s typically sweet, with a rich and earthy flavour which gives it quite an acquired taste on its own. However, paired with the right ingredients, you can accentuate its sweetness.

Did you know, beetroot is also one of a handful of veggies you can use in baking? Yep – it can help create some of the most gorgeous cakes and brownies. Beetroot powder is also used as an excellent natural PINK food dye.

If you already love the sound of this beet bruschetta, don’t forget to pin it so you can refer to it whenever you fancy…

What’s the difference between tapenade and bruschetta? 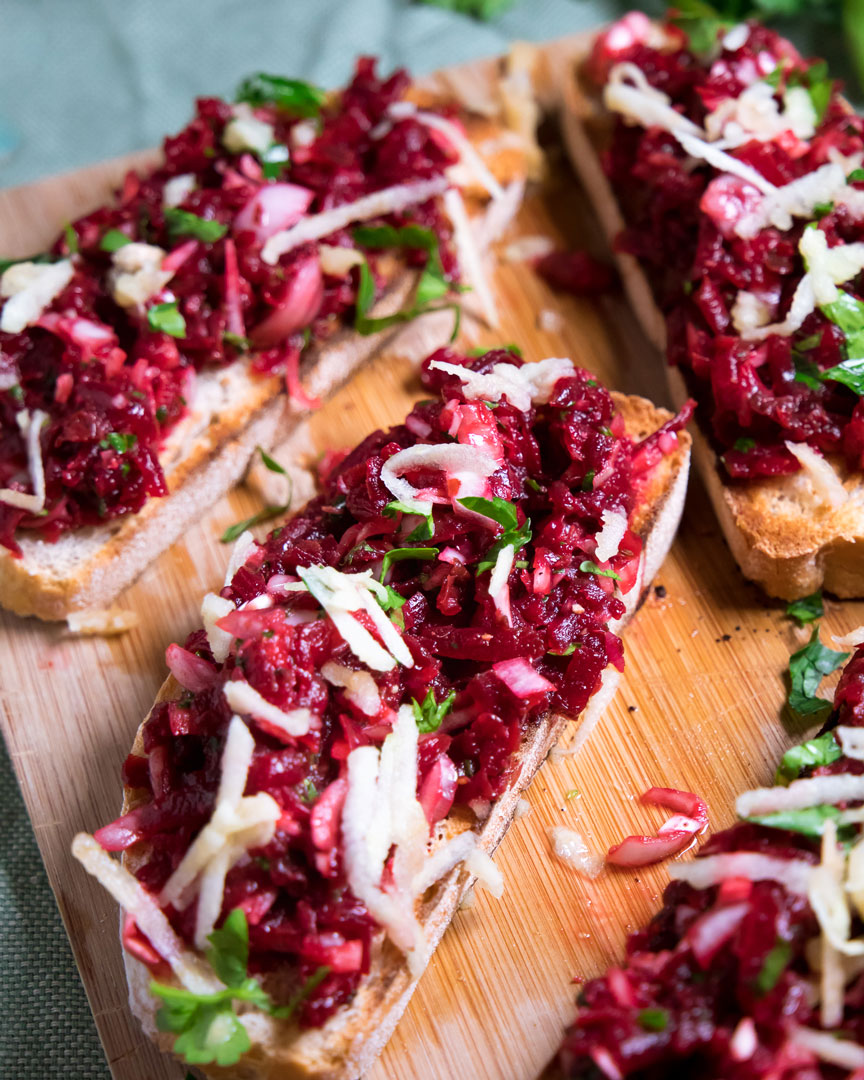 Let’s break down this recipe a little further…

I used to think Bruschetta described the well-known starter as a whole, but it actually refers to the toasted Italian bread used to make the dish – not the topping. The topping can vary from chef to chef, but in restaurants, you’ll commonly see a mix of chopped tomatoes, fresh basil, and salt.

Traditional tapenade can also be used as a bruschetta topping. Authentic recipes contain finely chopped olives, capers and anchovies. Vegan versions can be delicious swirled through pasta as much as it is used to top bruschetta.

Due to tapenade being so versatile, it’s easy to create your own variations. For example, instead of using olives as a base, you could use sun-dried tomato, lentils, or even aubergine.

Here, I’ve made my very own beetroot tapenade which I’d love for you to try. I took inspiration from a restaurant I ate at in Belfast called Coppi. They featured a similar dish as part of their Christmas set menu.

However, you’re free to experiment with different bread and tapenades when making your own at home. For this one, I’ve used a lovely crusty sourdough.

The health benefits of my beet bruschetta 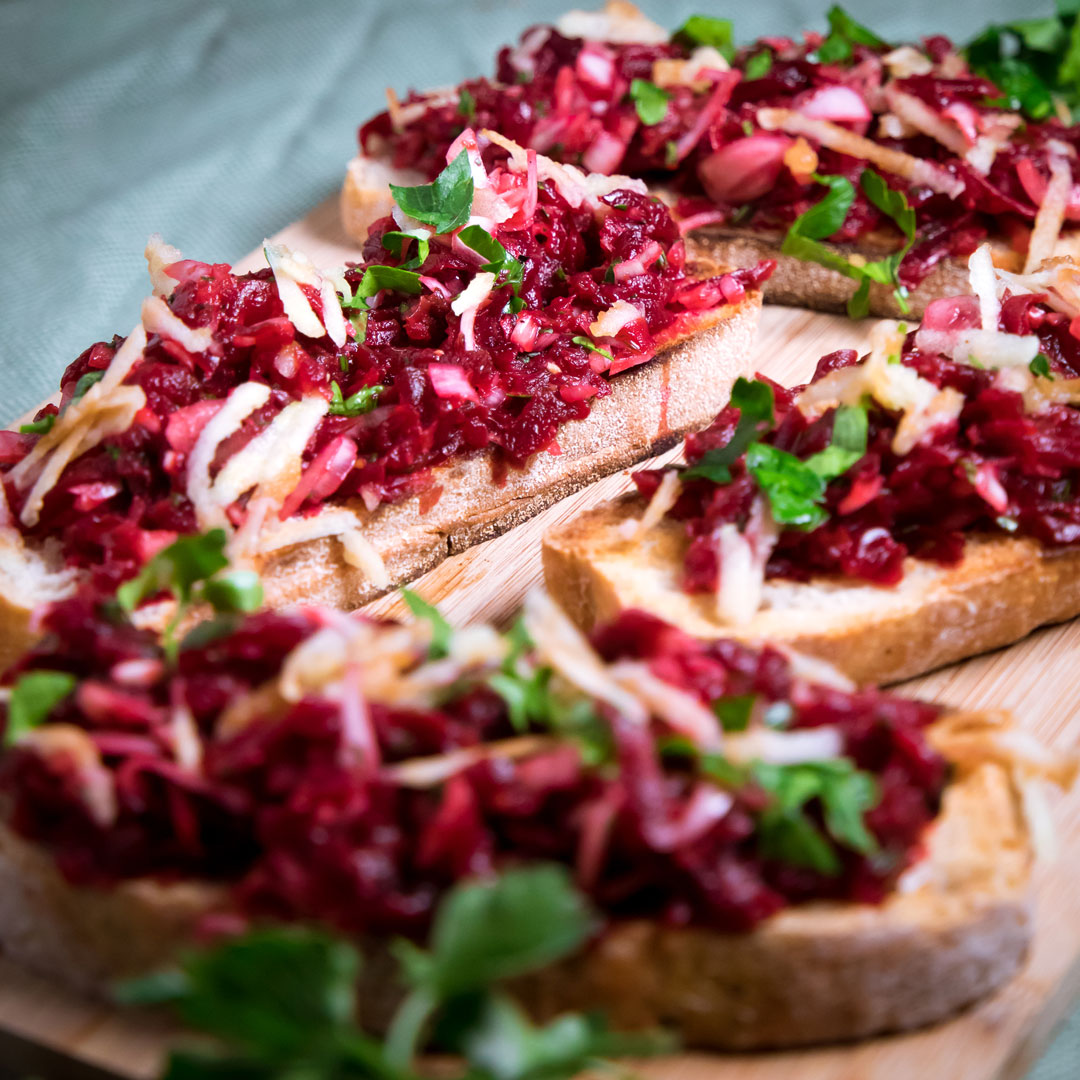 Whichever way you cook with beetroot, it’s low in fat, full of vitamins, minerals and packed with powerful antioxidants. One might describe it as a health-food titan.

Another key ingredient to this dish is organic apple cider vinegar. It’s renowned for being one of the most popular kinds of vinegar in the natural health community, as it boasts all kinds of benefits. Many are backed by Science.

Vinegar is generally well-known for its anti-bacterial properties, but apple cider vinegar is also known to support blood sugar regulation and reduced risk of heart disease. Its health-promoting properties are arguably due to the presence of “mother” – strands of proteins, enzymes and friendly bacteria that give the organic version its murky appearance.

Anyway, enough chat. I hope you enjoy this recipe and would love it if you could leave me some feedback and a cheeky follow on social.

TIP: You can pre-make the tapenade the night before you need it, but serve it at room temperature on the day.

Inspired by one of our favourite UK restaurants, Las Iguanas, here is a recipe for a vegan chilli con carne. Traditionally meaning “chilli with...
Read more
Recipes

Chilly weather gets me wanting all the comfort food – what’s better than a plate full of carbs in times like that? This vegan...
Read more
Recipes

I am on a mission to 'veganise' all your meaty favourites. Here, I’ve made Chinese vegan bao buns with katsu ‘chicken’! Have you ever tried...
Read more
Recipes

Who wouldn’t fancy strawberry and raspberry mojito PINK pancakes?! Yes, I have taken one of the nation’s favourite cocktails and turned it into pink...
Read more

Creative and professional food photography across Ireland and the U.K...

Artistic vegan cakes and bakes for special occasions and events...

Affordable, professional and delicious catering for special occasions and events...

Downloadable and useful resources for your Life Without Meat...